Recently I received correspondence from artsy.net noting my references to kawaii in this blog, notably the cute figures here,  see also a train carriage here.

My attention was drawn to an article here on the evolution of Kawaii in art from the 1970s.

I am conscious that while kawaii was emerging I was taken by a similarly hard edged but not cute style in the work of Yayanagi Go, two of whose works I acquired in the 1970s.

The work on the right is from an exhibition at the Instituto Tomei Ohtake in Brazil.

You will see some link to Yayanagi's individual style in this work of Takashi Murakami at Artsy.

The term kawaii was not however new in the 1970s, though Hello Kitty was certainly new then. Wikipedia traces the term to Lady Murasaki in the eleventh century and says that:


The original definition of kawaii came from Lady Murasaki's The Tale of Genji where it referred to pitiable qualities.[9] During the Shogunate period under the ideology of neo-Confucianism, women came to be included under the term kawaii as the perception of women being animalistic was replaced with the conception of women as docile.

So it's historically not an entirely flattering term.

Wikipedia goes on to explain the modern phenomenon as arising from schoolgirls beginning to write across the page and with modern pens, interspersing drawings. Among early shifts from the page to other forms was to cute pencil cases. This is a google search for Japanese pencil cases 1979.

It's reasonable to think that others shared my view of the triviality of kawaii as it emerged.

There has also developed a worldwide appetite for Japanese anime, an art form with some links to kawaii but going far beyond the cute.

It seems to me that Kawaii has deeper roots, not just some spontaneous shift in the 1970s. Take for example work of Kamisaka Sekka, 1866-1942.

Compare with the kawaii work of Yoshimoto Nara at Artsy, which definitely brings in a naive school pad doodle quality with a common tendency to English language and cultural borrowings. 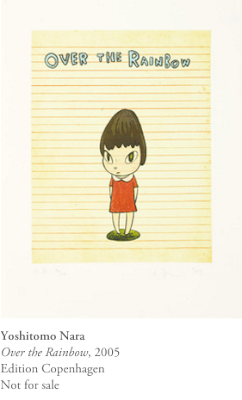 The wearing of western style school uniforms dates from the Meiji era.  The shortening of skirts came in in club wear in the early 1970s from the European miniskirt. The fetish combination of short skirt and maid uniform more recently, notably as driven by Akihabara. But fetish is something else, otaku, which overlaps a bit with kawaii.


There is in some of this (though not in all anime) a peaceful or childlike quality which may also have been a factor (I speculate) in the rise of this as acceptable 'new' art form in postwar Japan in a time when young women sought more freedom, though the art form itself may somewhat trivialise them. Also compare to the much more difficult art form of apprenticing as a geisha, the apprentices called maiko. People rush to photograph maiko in Gion, Kyoto in the evening, here images at Pinterest. Simplified stylisation and minimal gesture are of long standing in Japan, in contradistinction from mainstream European art. In collision and synthesis with postmodern, all the rest is commercial success...

Another perspective, 29 kawaii things, from the excellent Japan Talk website.


We cannot leave this subject without mention of music and without medicine from Cibo Matto.

or mention of Koenji, our favourite village of Tokyo
where evident that kawaii need not be seen as a cutesy separate thing
but integrated into a culture of innovation