Day 9: bags at the Keisei Ueno Station, the pleasure of a break in the Museum of Western Art

We were down to last bits of money in wallets, last bits of brain to squander, last shreds of feet to wander... packed and taxied to the station (the entrance convenient to the taxi coming from our direction is the one with nothing but steps to drag our baggage down), tickets bought and seats booked on the Skyliner for later in the afternoon, bags consigned to lockers.

We had time to visit something among galleries in Ueno Park, some were changing exhibitions, we elected to go to the National Museum of Western Art.

Multiple railway stations, multiple museums in a large park. The park where we had started. 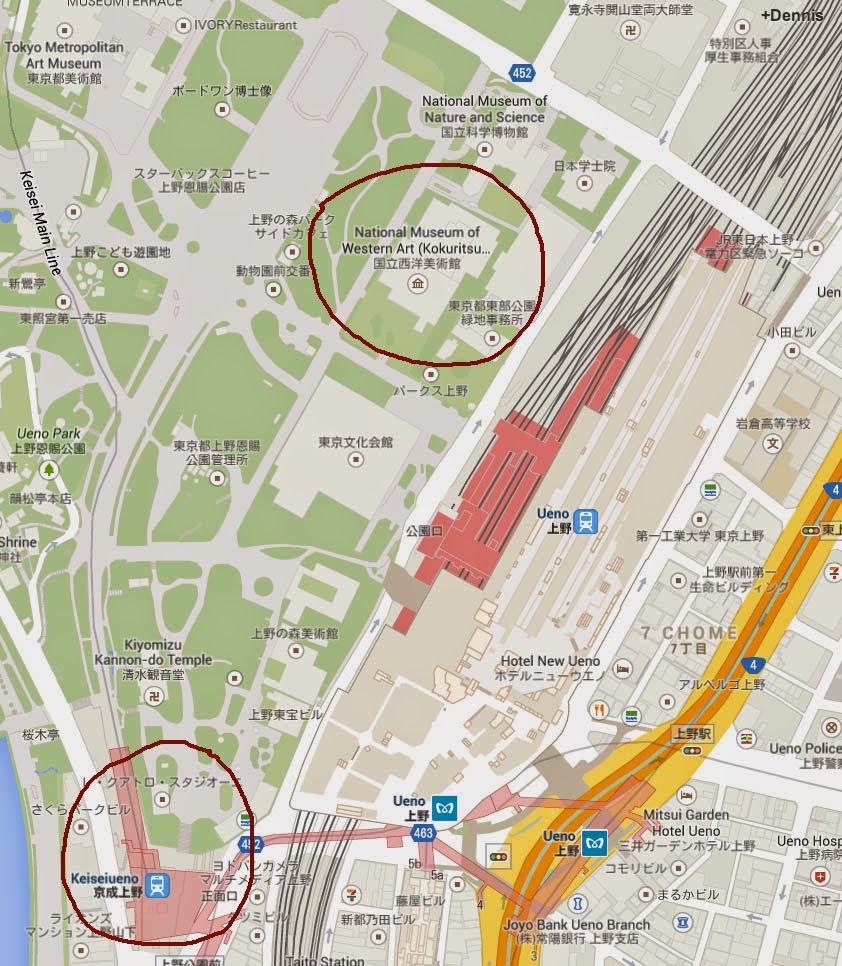 This museum has an unusual history, having been built around the collection of one man with a shipbuilding fortune... and only a small part of that collection, made during the early 1920s, much having been lost by misadventure in Europe before the remainder returned to Japan in the early 1950s, having been confiscated during the war. The building is by Le Corbusier, my photo of the outside rotten, please go to this link, the Museum's information on the building.

It is an elegant place and most people looked more elegant than did I, especially in the place where we stopped for coffee. 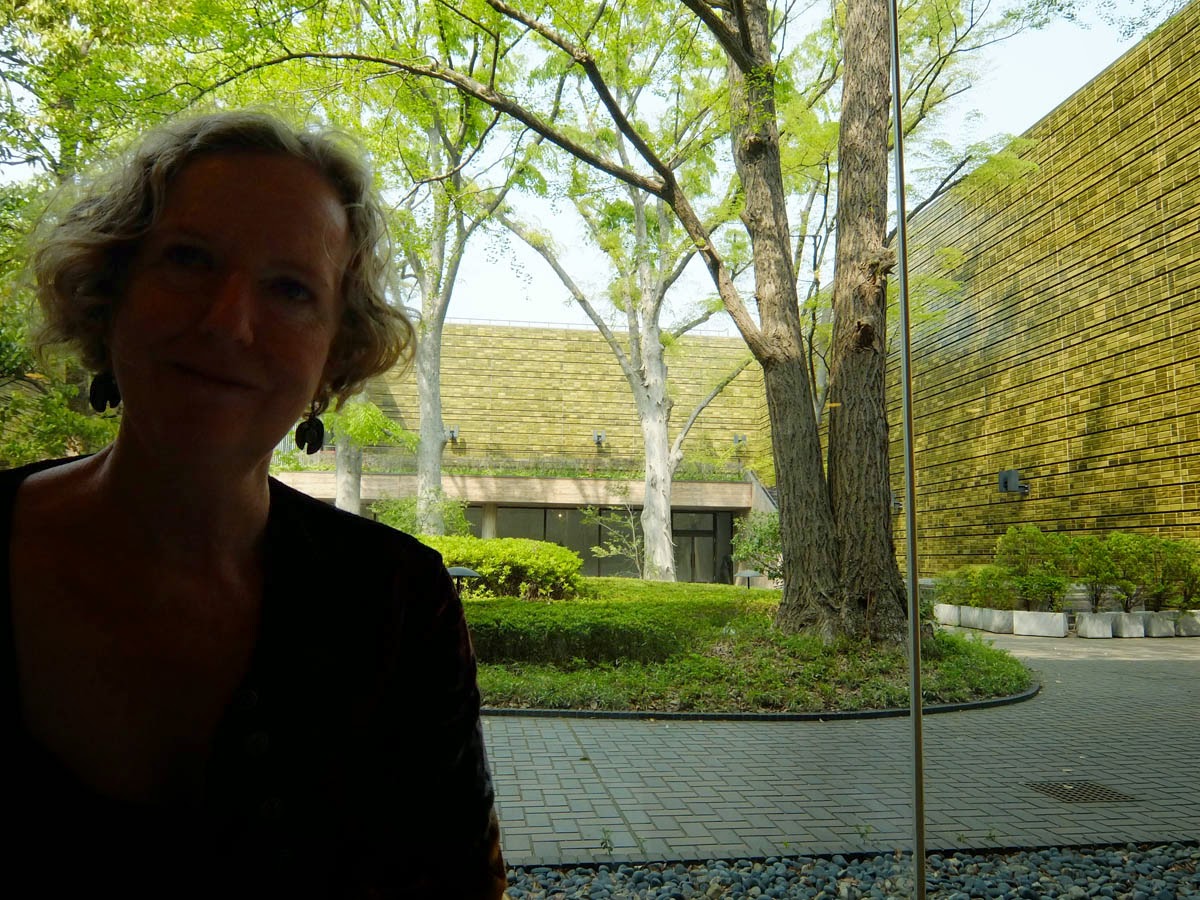 The Google Cultural Institute link offers a good view of some works.

The building itself is art, also satisfying with its simple statements of the Modular or Modulor. 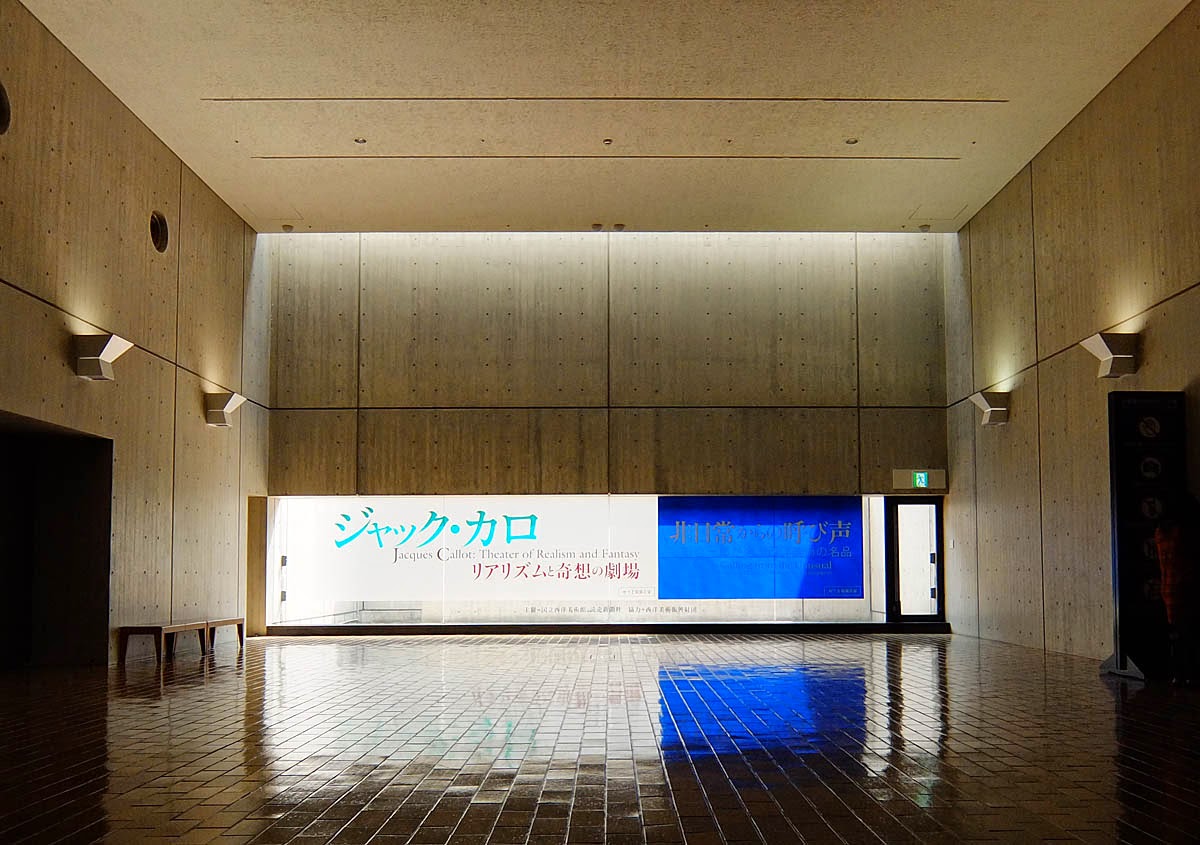 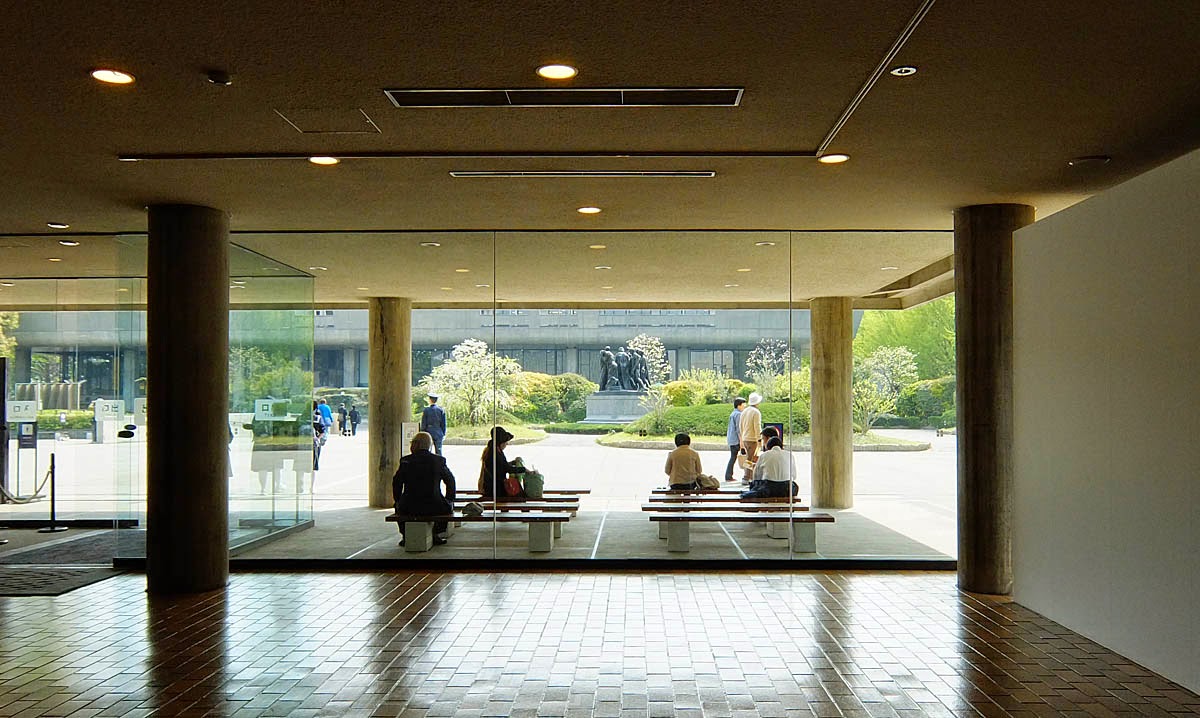 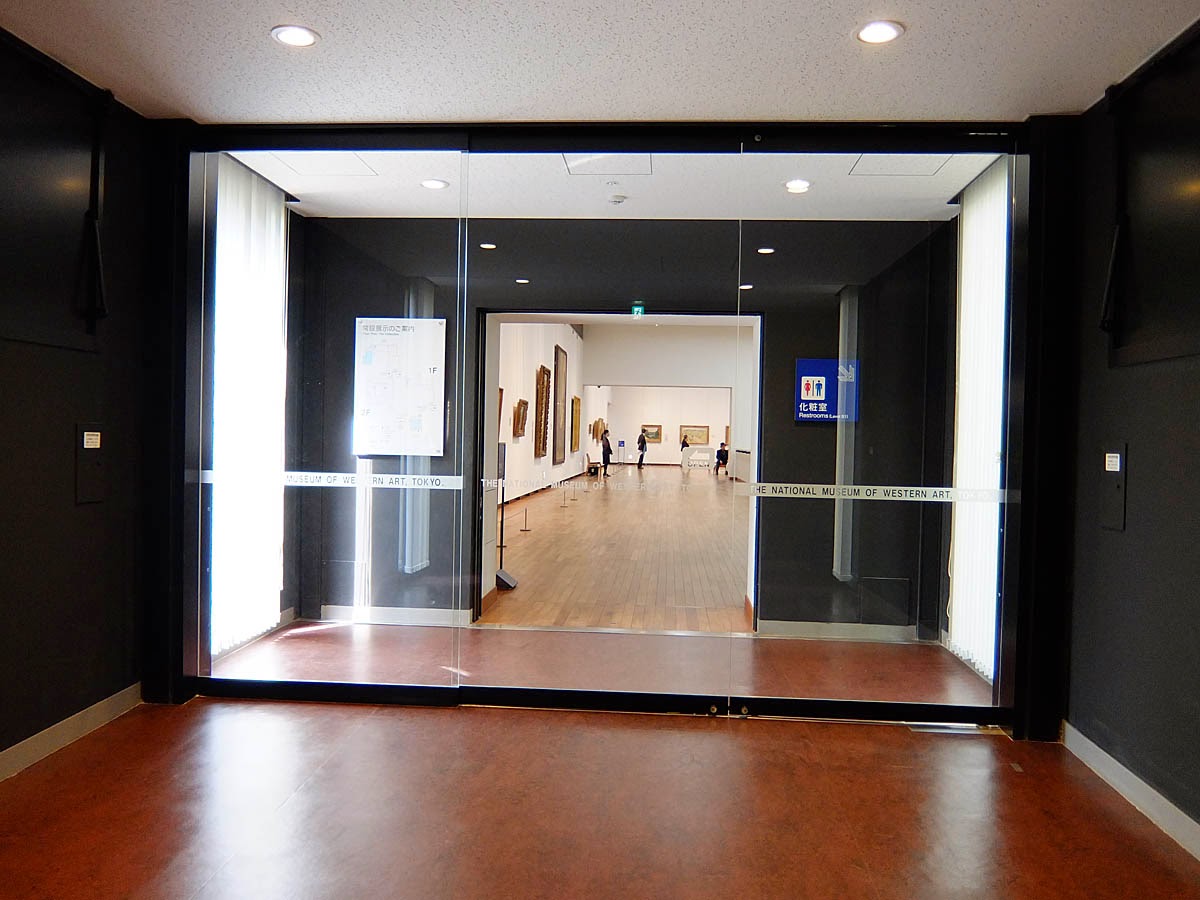 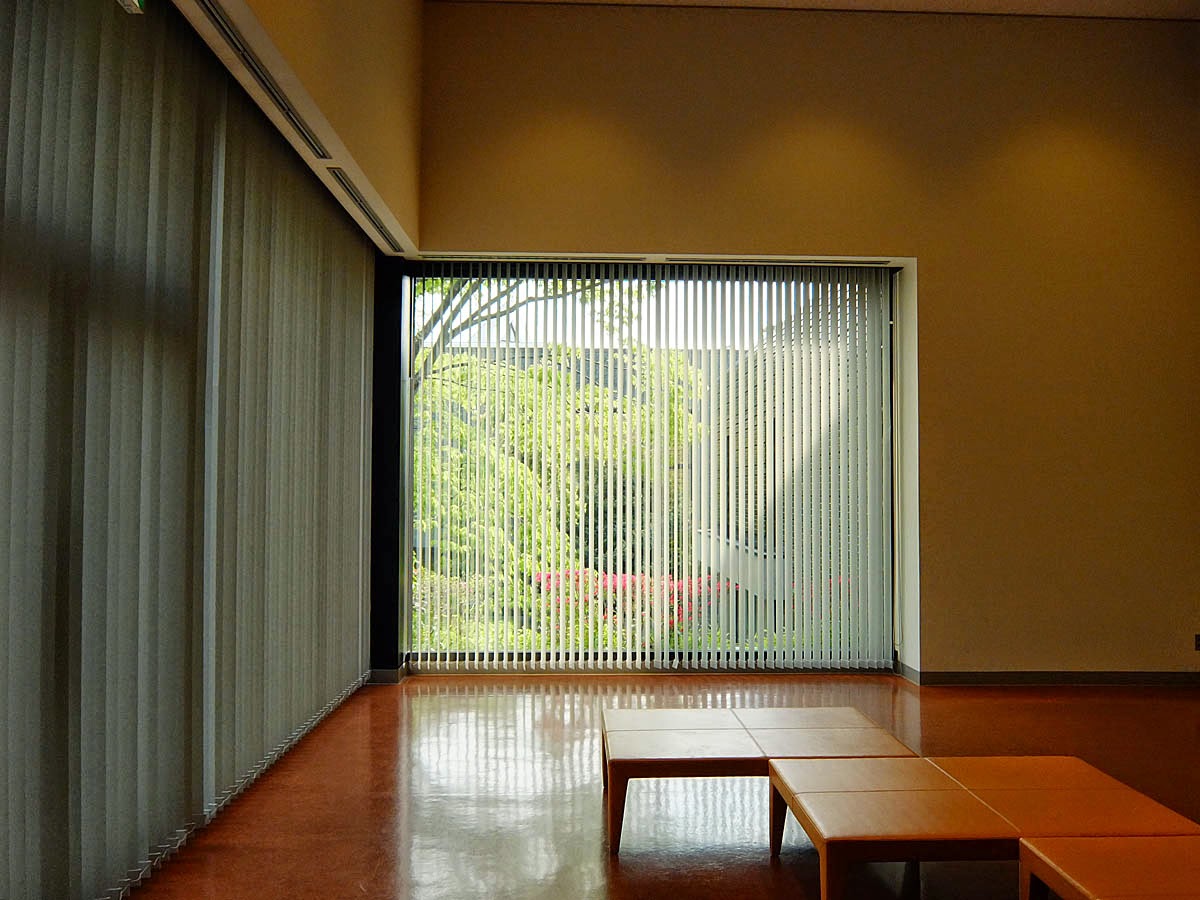 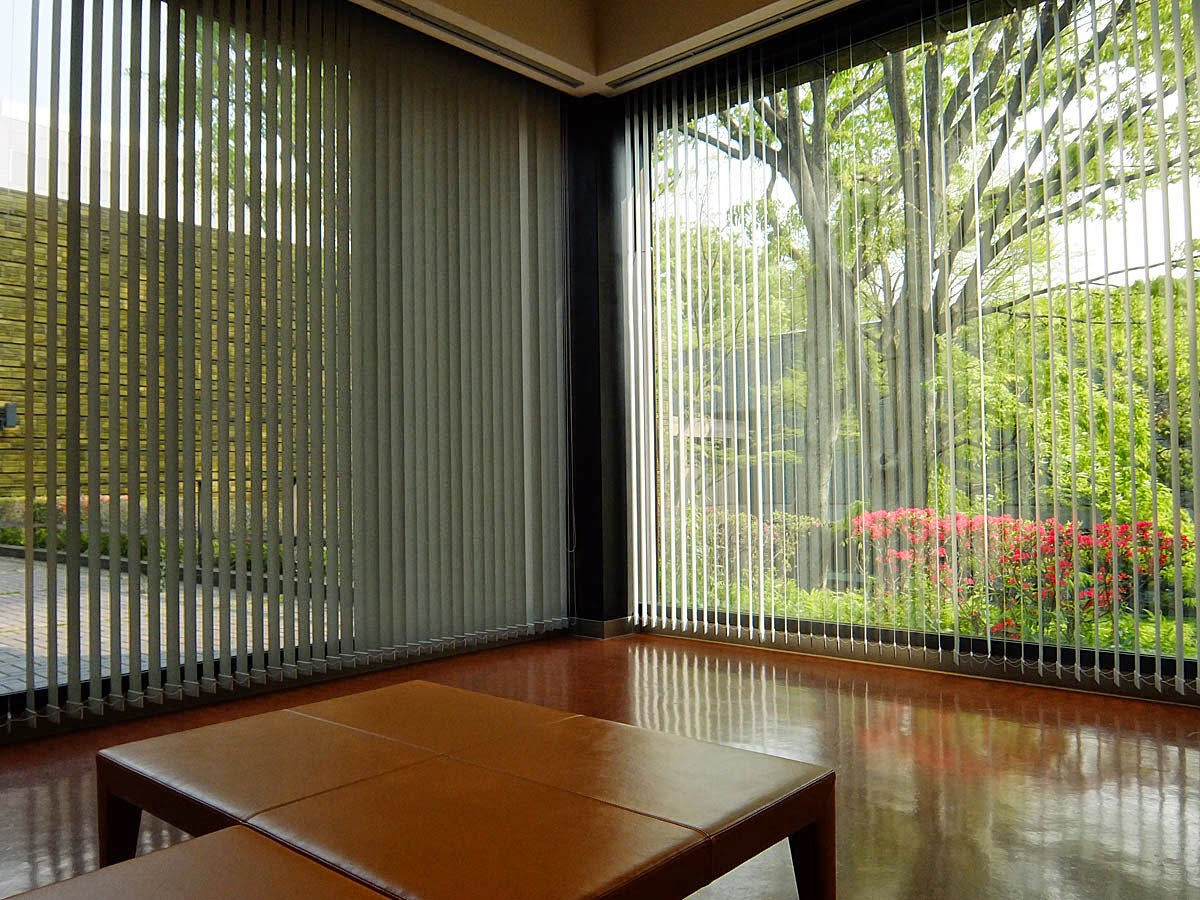 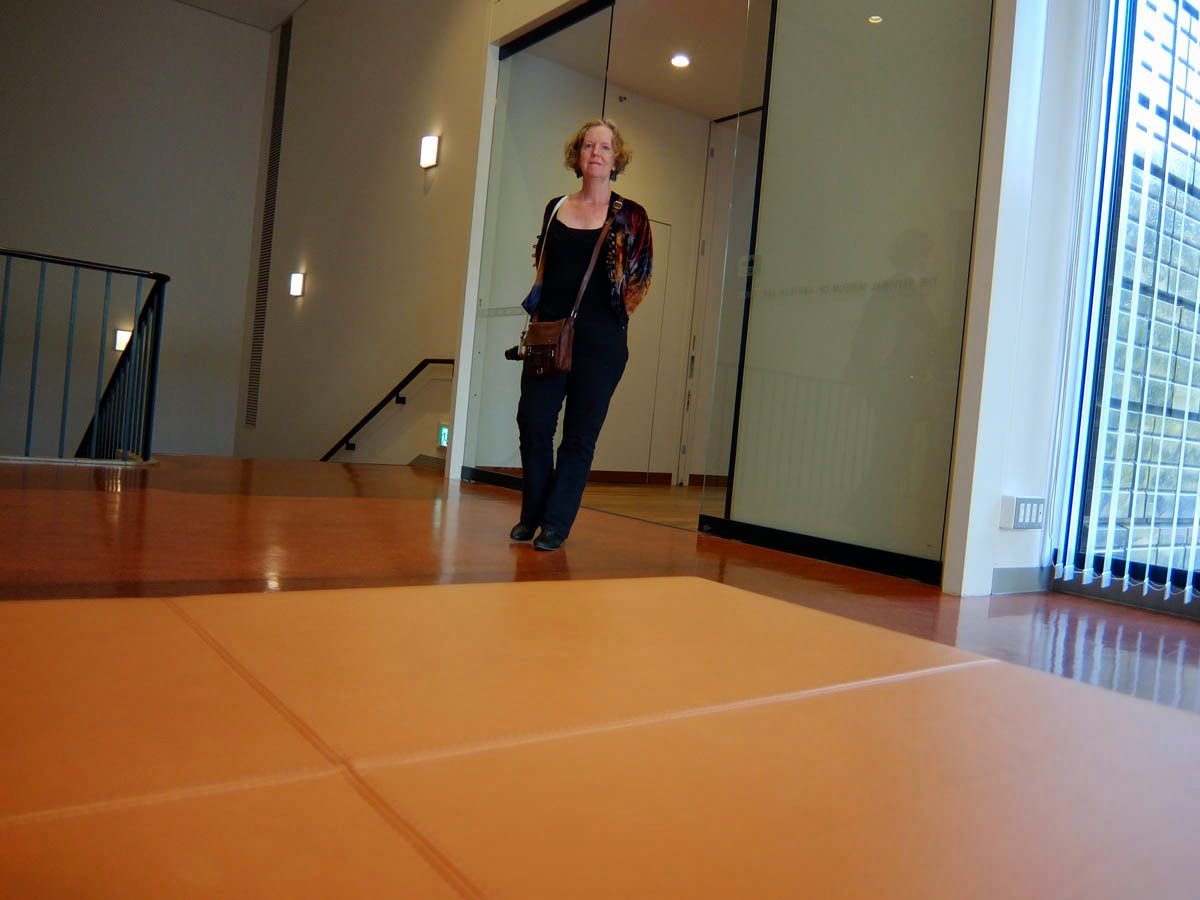 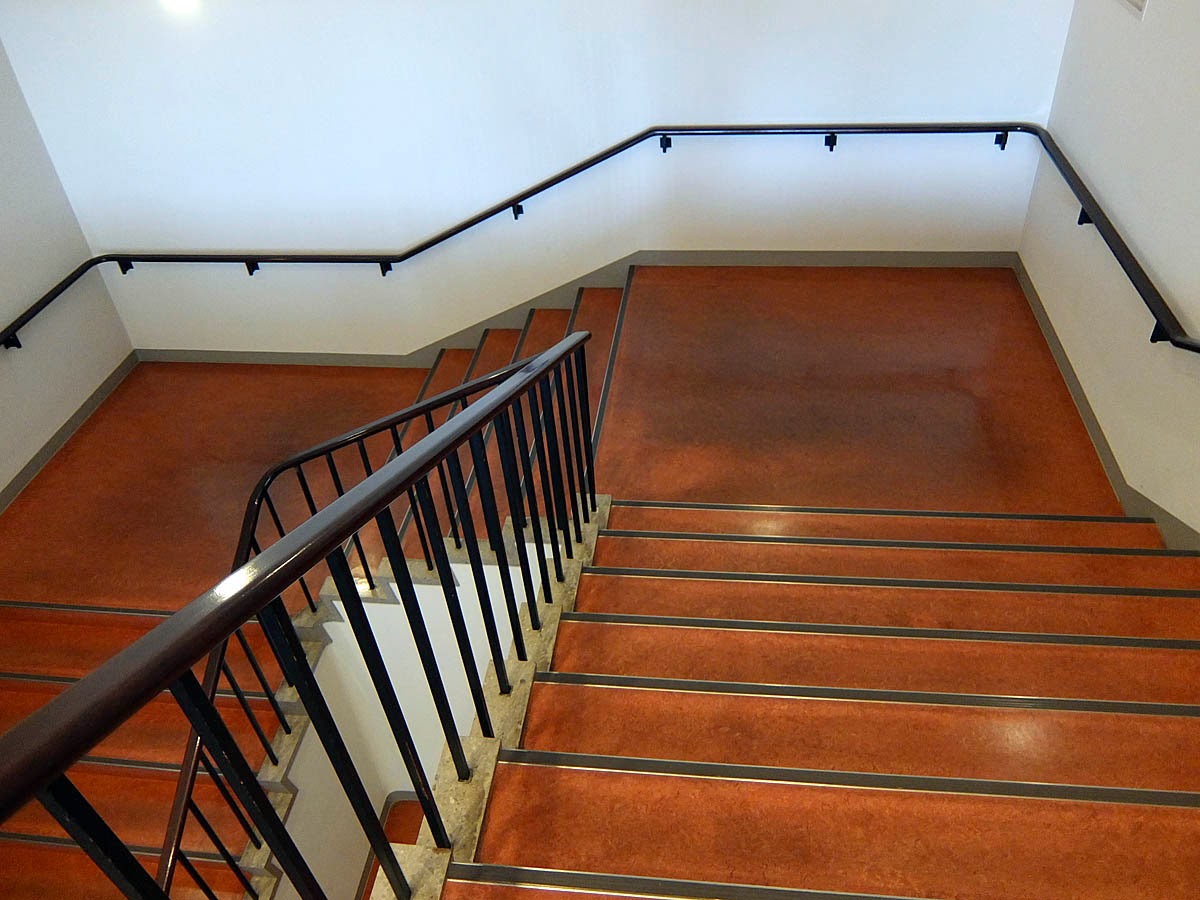 There was some great work to see, though I do not seek to represent it here other than with people present, for the mood of the day and the place 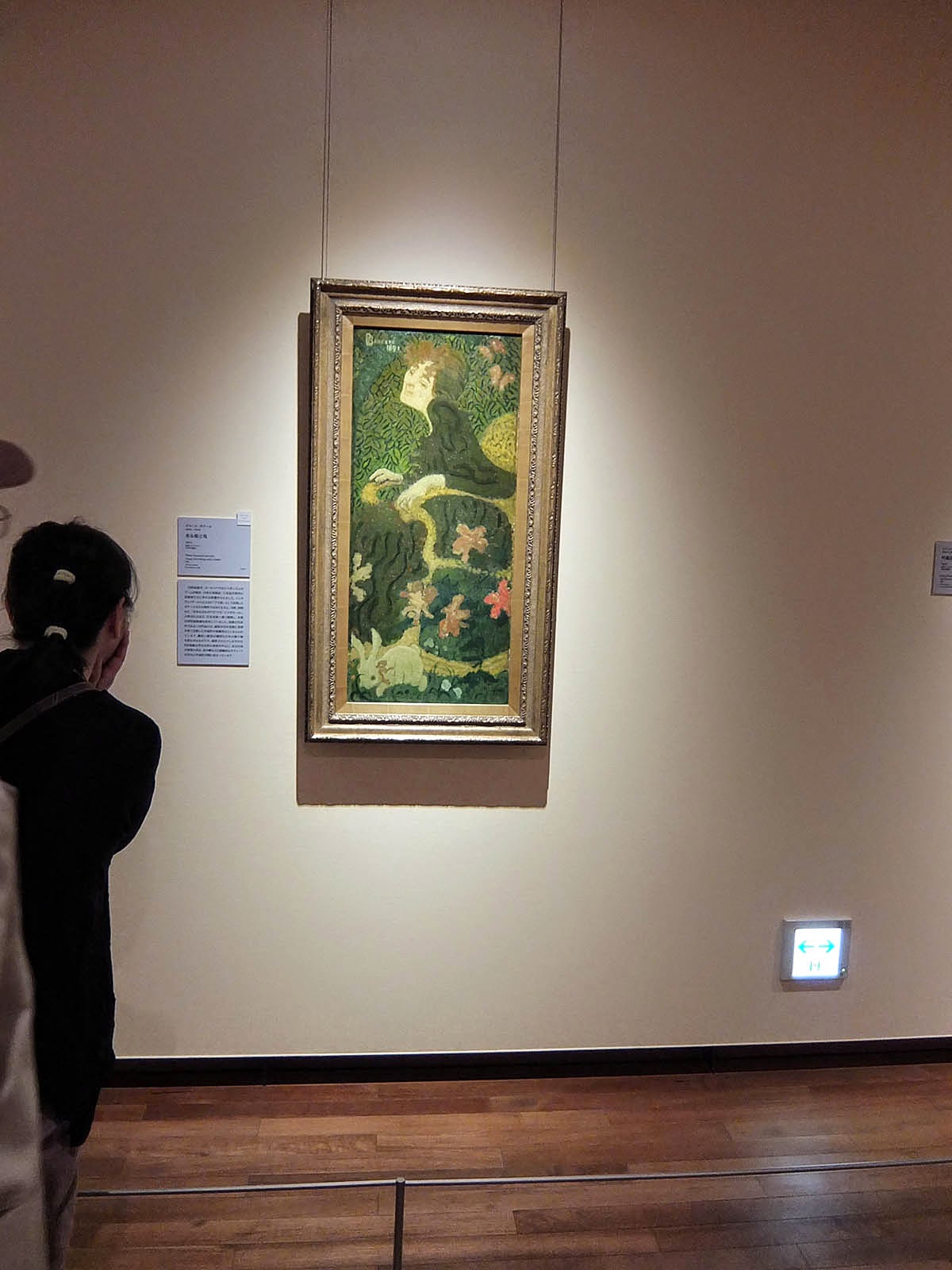 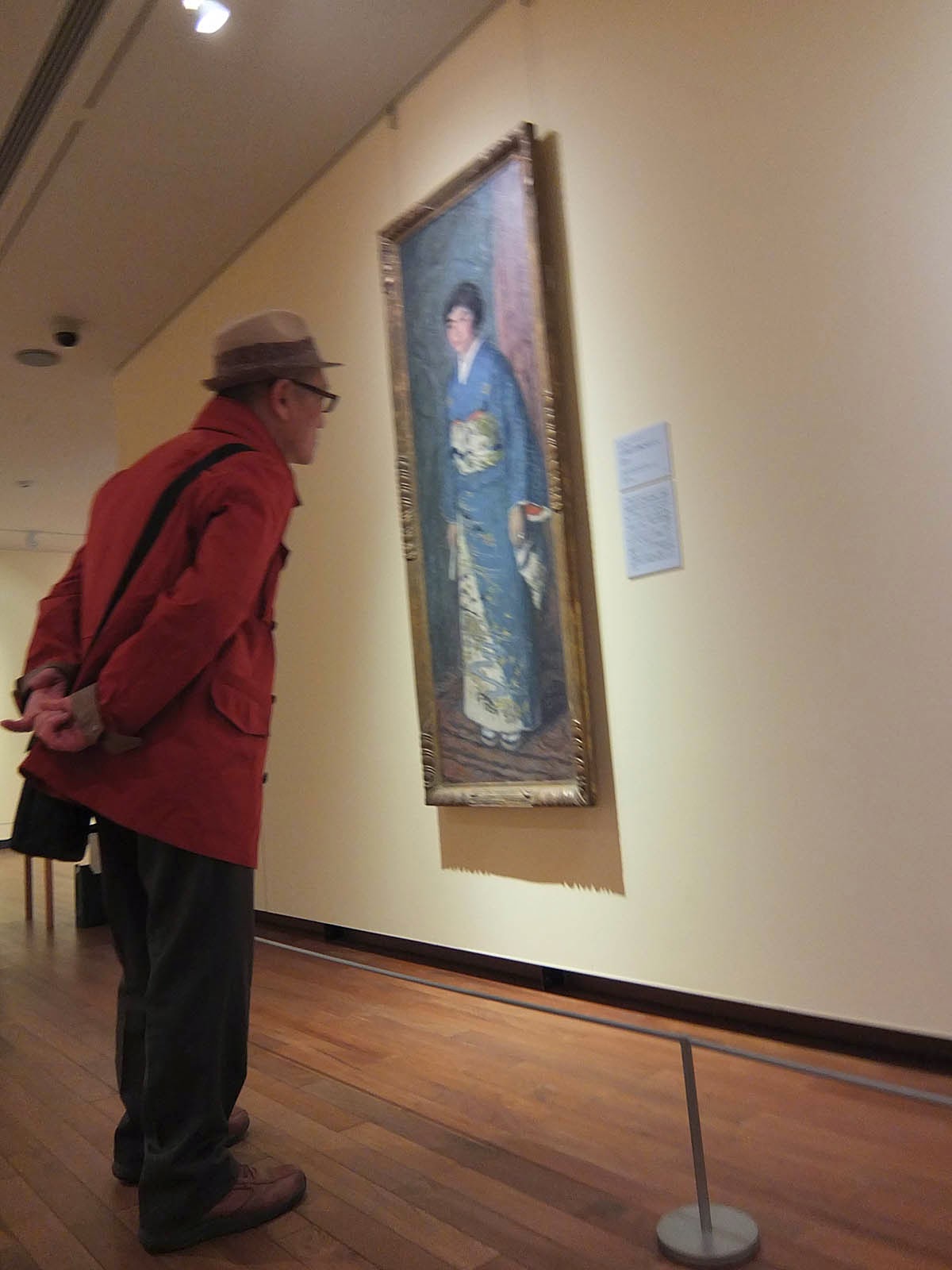 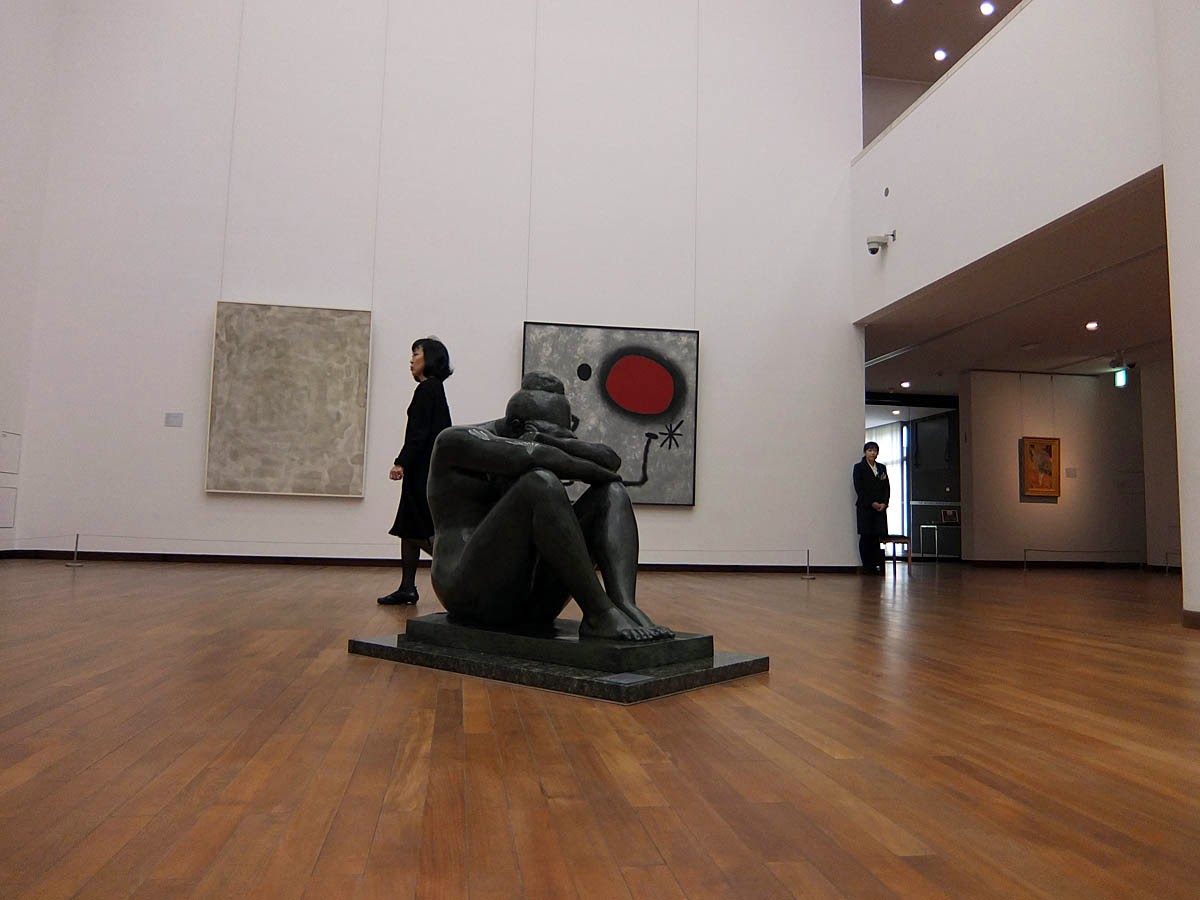 We were not alone in seeking rest... and being tired is OK in Japan. 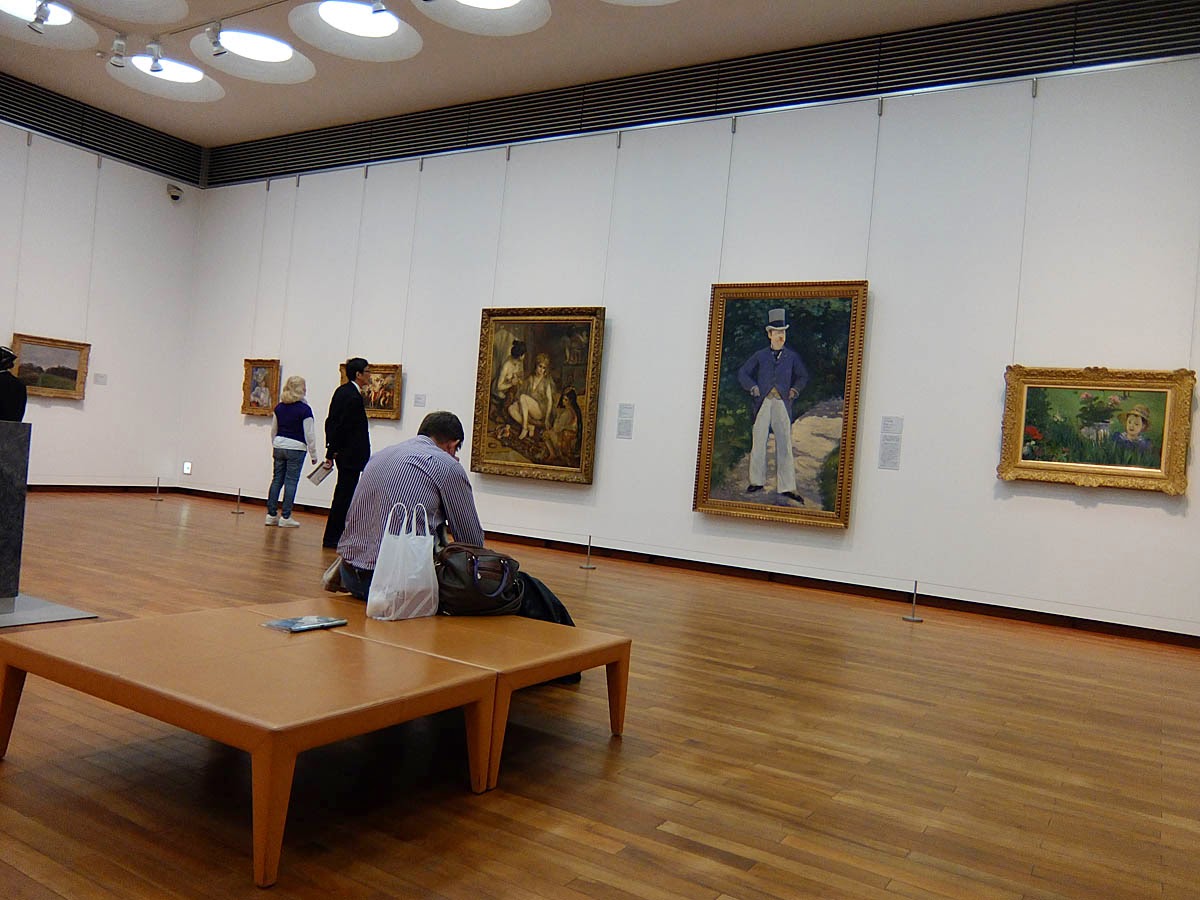 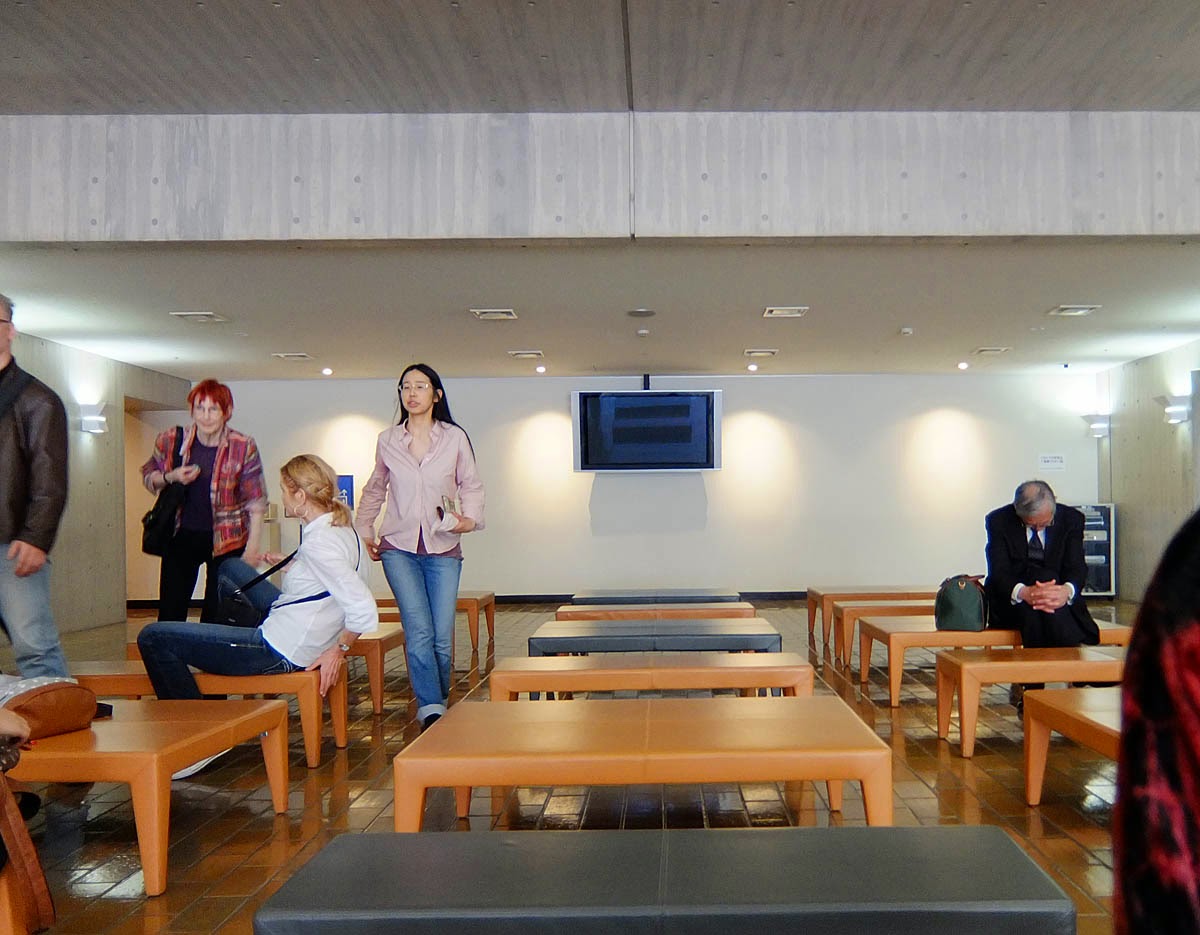 Though certain people who must remain nameless,
because we don't know their names, had snagged the best seats.
You can buy your own Le Corbusier chaise longue here.
That ad (at time of writing this blog entry) says:
"A gentle warning. Once you sit your body in the Le Corbusier Chaise Longue (LC4), you may never want to get up again."
The evidence is before your eyes. I saw no prospect of getting a turn on this one.
But if considering getting one, when you look at that advertiser's video at YouTube,
you realise that the chair
will look nothing without the museum, so be prepared to dig deep!
The same advertiser says that the other chairs here,
the "Grand Confort Spécial" are filled with duck down. Again, not free soon... 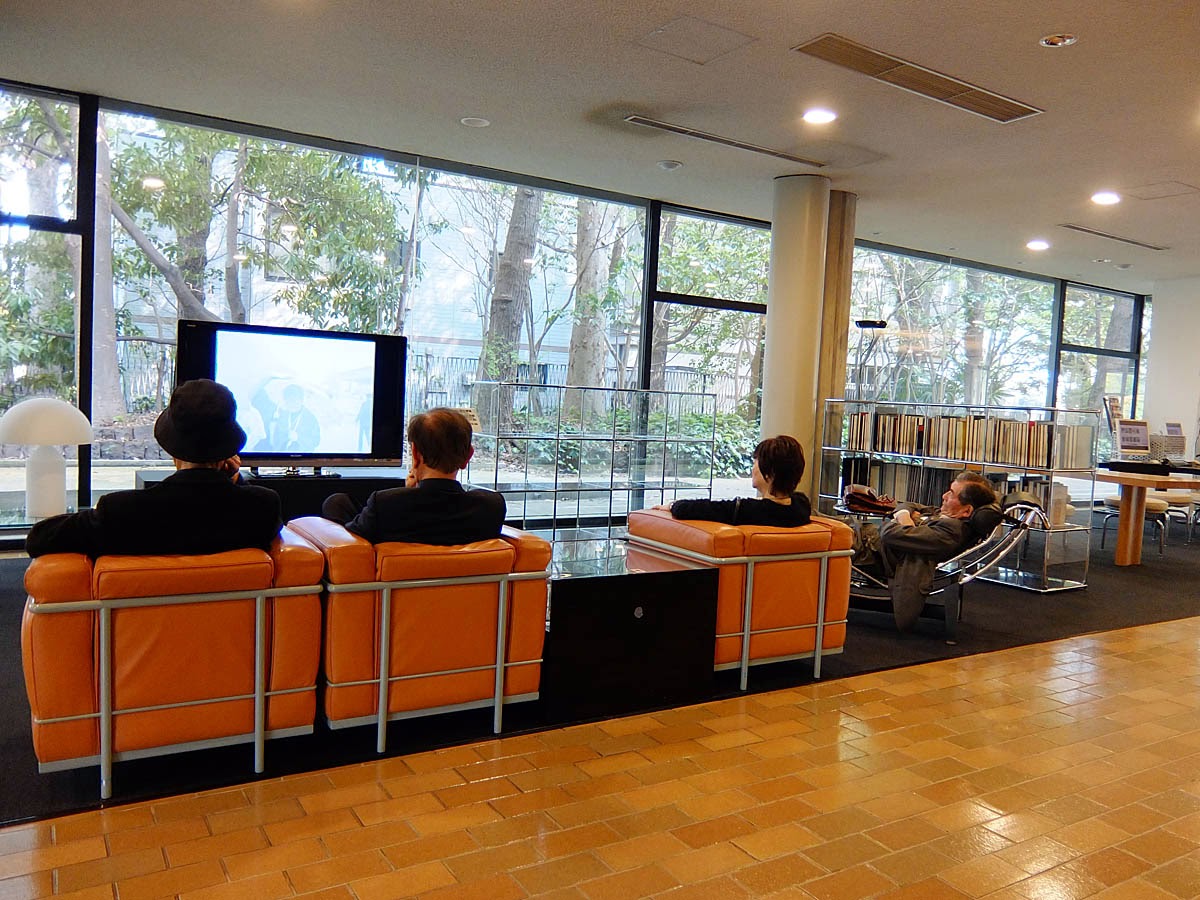 Finally, we should not leave unmentioned that this fine museum stands with many other fine places in Japan in offering superlative toilet facilities.
This a disabled/family toilet on the ground floor, I confess to declaring myself unable to get down the stairs to the regular toilets at this end of the day, which was certainly much the case, but it was an exhibit needing to be inspected.
Even some ordinary railway toilets boast the clever seat to hold the infant.
Why do we not consider such thing?
The bidet and wash function buttons are on the wall.
I was initially alarmed by the location of ... was it a urinal?? ... on the left wall, in an impossible position. It was a handwashing basin accessible from wheelchair. No taps of course, no touching anything. Similarly, pass your hand in front of the flush non-button, and it flushes. 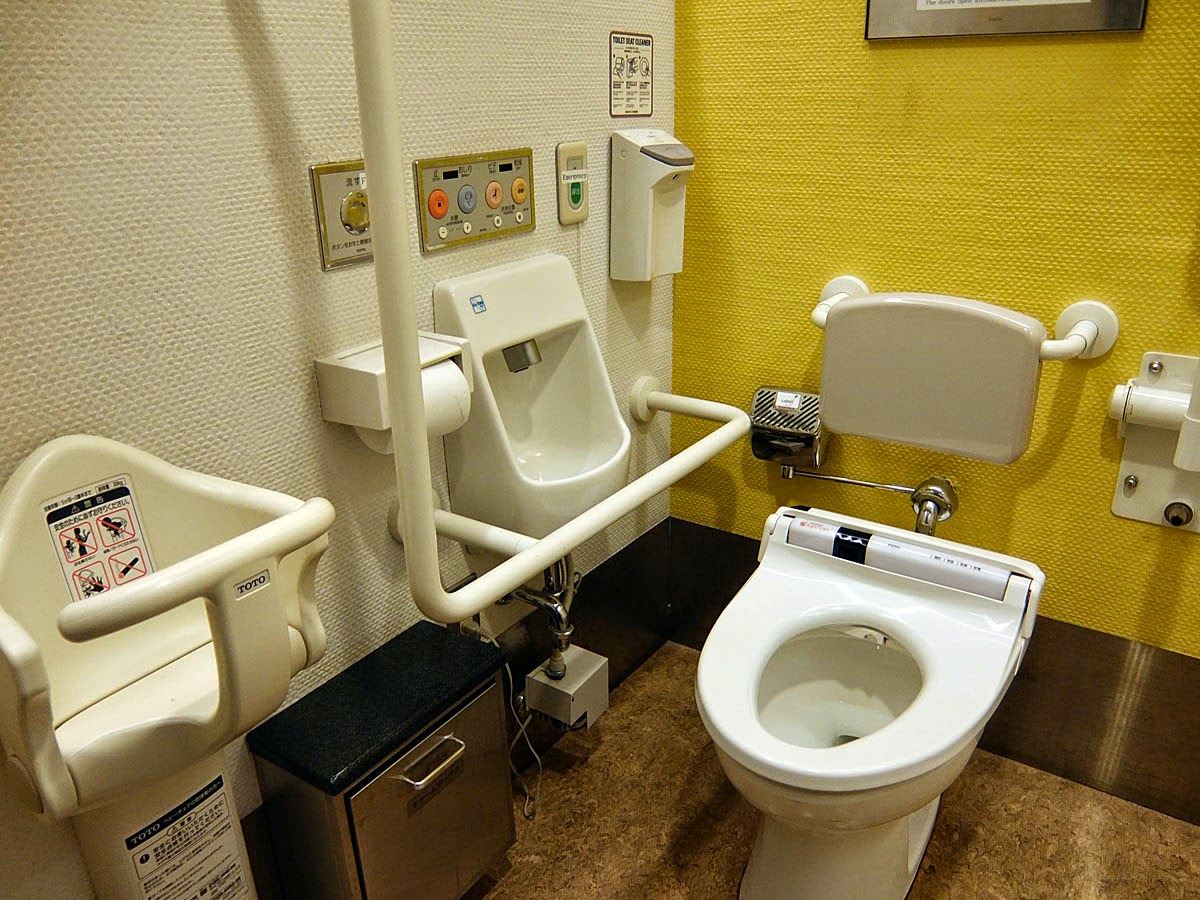 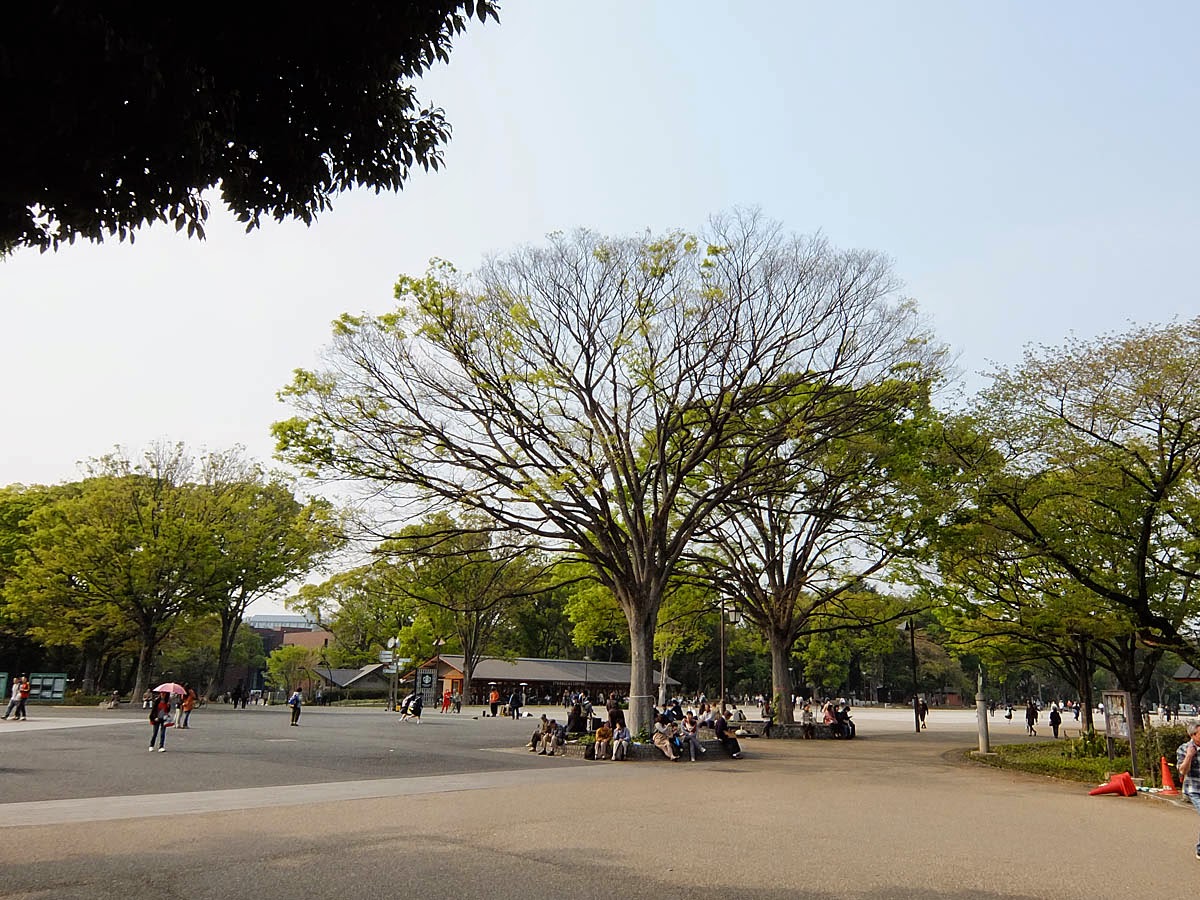 before introducing ourselves to the departing-every-20-minute Keisei Skyliner (the sharper, pointier one, forget that mildly sluggish gaudy creation on the right) 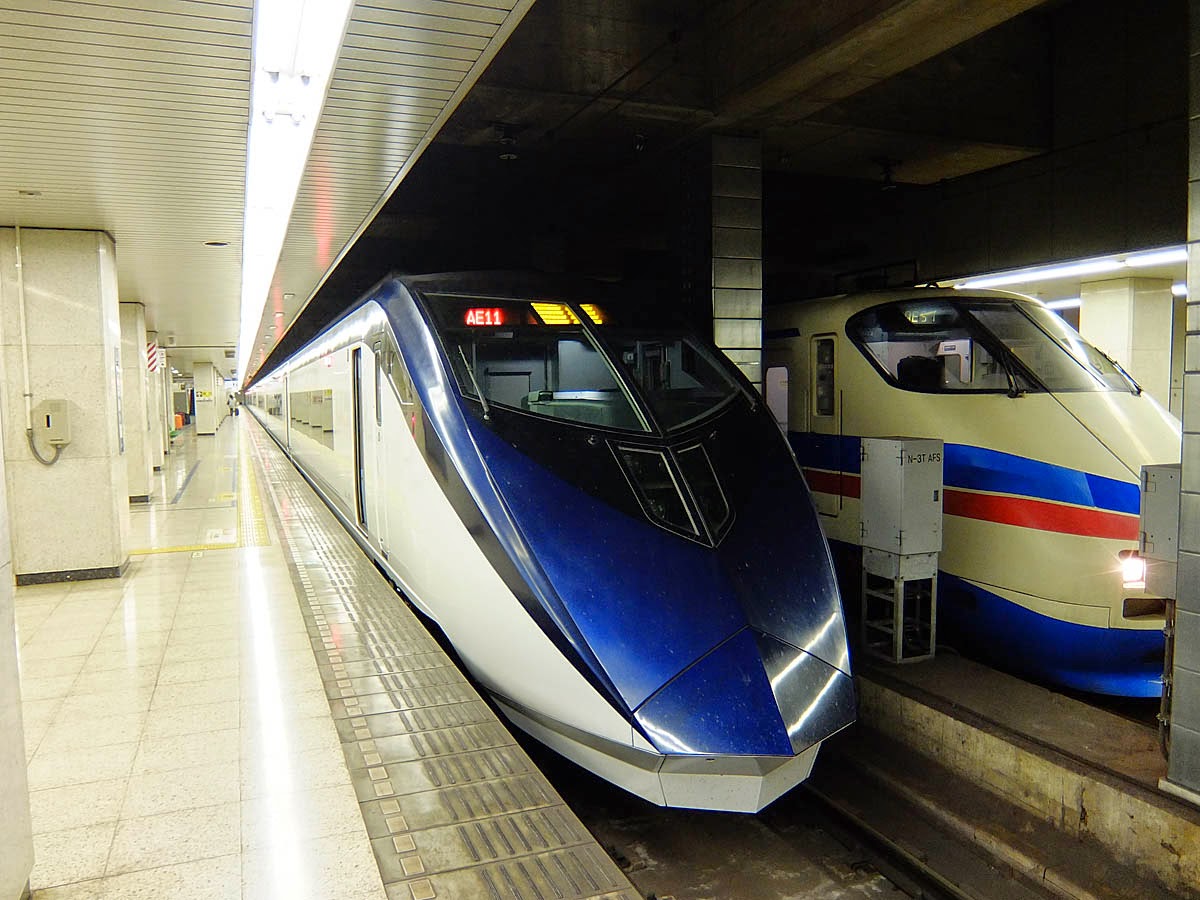 to be whisked at enormous speed to Narita Terminal 2 in time to wait quite a long time for our flight out at 7.45pm, with just enough cash for a pleasant 'Indonesian' curry while looking out the window.* 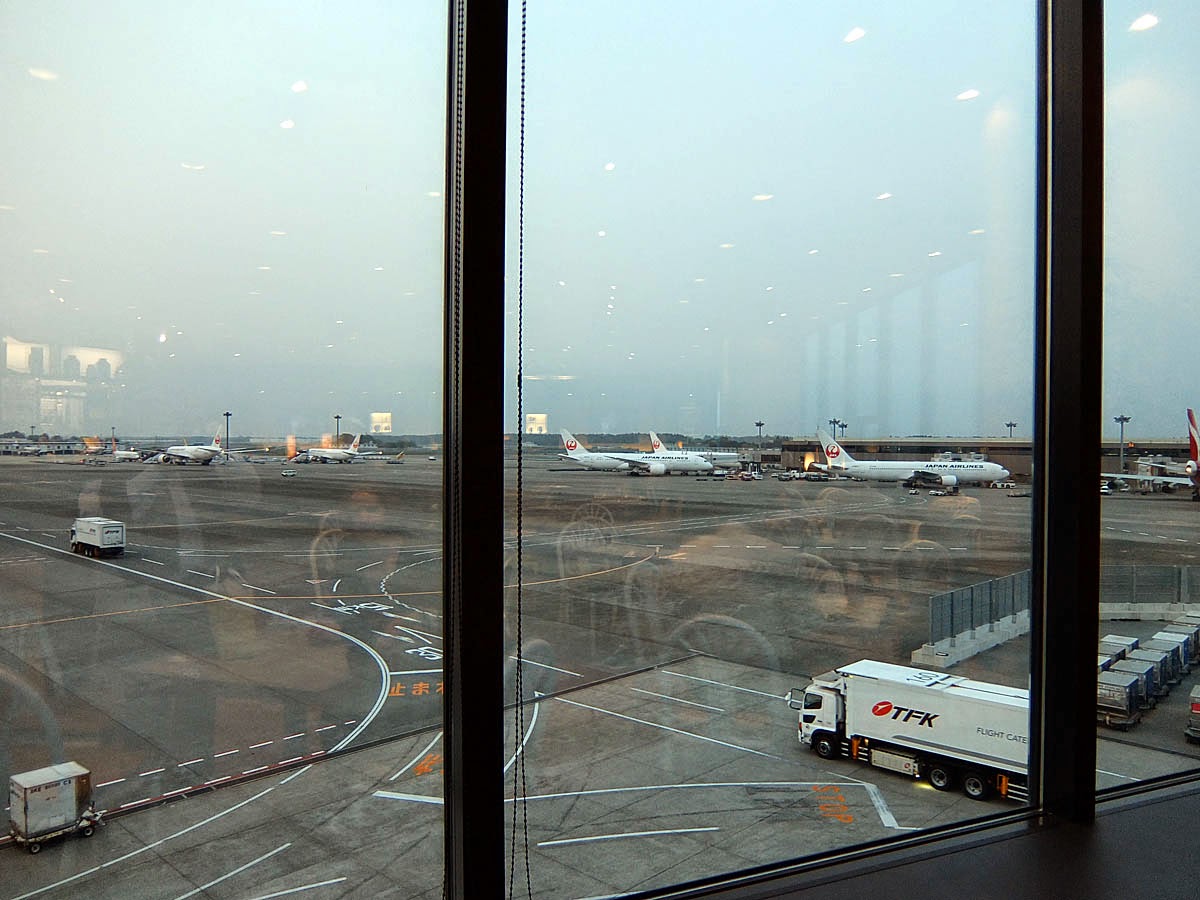 Sayonara...  sigh...
Such an amazing trip, such an excellent amount of time to feast, remain coherent, remain upright, be quickly and completely blown out of home preoccupations and into another universe.
========

* I note that in contrast to experience of queues in other international airports, as we approached the check-in area of Japan Airlines at Narita 2, as unentitled cheapest Economy Class passengers, we were met by a polite young person who directed us to an empty counter, went behind the counter and proceeded to do everything instantly and brightly.
And then off to Sydney for cheerless soulless cold dealings by Border Protection staff at the airport there, mean manners imitative of a Morrison. Hard landing home...
Posted by Dennis Argall at 16:26