We never imagined it would be so extraordinary.

Kyoto Station, opened in 1997, was built to celebrate the 1200th anniversary of the founding of the city. I learned that in this guide after leaving Kyoto. That guide rightly observes that it is a "perfect contrast to many foreign tourist's image of Kyoto."
=====
We had, on arrival in Kyoto from Tokyo, scurried underground to catch a subway train and indeed when leaving Kyoto, we arrived at the Kyoto Station the same way. But we were early at departure, early for our Tokyo train and decided to have a look outside. We had some difficulty initially discovering the outside. Helen summed up the situation, as we passed from one major shopping corridor to the next, full of gloss and beautiful refined people: "Perhaps there is no outside, there seems no need."
But we did get out and again it was Helen, seeing an escalator of extreme size through a glass wall, who said: "We have to go on that!" She also noted on the building diagram outside that there was a museum on the eighth or ninth floor. I noted as we moved to enter that there was another escalator. No, mine if bigger, she said. Indeed, from the bottom, when we stood there, her escalator was bigger. Moreover, there was a cunning visual trick. From the bottom one could not see that there was another escalator after the first escalator. And ditto. Perhaps Everest is like that.
The escalators go almost to the top. Stairs necessary to finish the trek. Not too many. A few courageous or foolish appear in my escalator-shot movie to be running up the stairs all the way.
At the top, there is a small sign, the name of the place. You will at least have to ride my movie to know it.
Helen having whipped me up the hill, so to speak, at the top said: "I wonder if I can get down, my vertigo will probably cut in." I pointed out that while no elevator, there seemed a large crane higher to one side and a heliport. In fact, I think the journey up and down cured her vertigo. But we were pleased to have more time as we took another quarter hour at the bottom to find the Shinkansen. The word bottom was relevant. We had gone down too far, we needed to ride up escalators again to find the Shinkansen station. Not as many escalators as we tried, we had to ride one down a floor when we overshot going back up.
These observations:
1: do get to the station early in Kyoto to ride to the top on escalators. But there seems no alternative to steps at the top, and without taking those steps, you miss out.
2: this is good stuff when you are planning to sit on the train for two or three hours.
3: whether this will cure you as it apparently cured me of the desire constantly to feel semi-undressed and grasping for my seat belt as I did on coming to Kyoto on the Shinkansen Kyoto at 200km an hour, passing other trains at combined 400+km/hour I don't know. The evidence is that sitting in my aircraft type seat on the train back to Tokyo I did not miss my seat belt. Perhaps just tired.
4: whether you will be cured of vertigo we cannot say. Whether you will develop vertigo we can't promise.
5: leave time to find the train when you come back down. It's a big station with many distractions.
6: We found some excellent crusty bread in the station such as we haven't found in Tokyo, but we honestly can't tell you where we found it. It had a French name, of course. And the transaction required all our resources of polite terms of trade, the sumimasen, the arigato, the domo arigato goziemasu. But no matter how strenuous our efforts to be polite, the lady beind the counter stood by the tradition evident everywhere in Japan that not only is the customer always right but the salesperson must always be able to respond to any statement of appreciation, any minor or greater bow, with more profound appreciation. It was not a 7-Eleven shop, where the language matter has been advanced to a further level.

This adventure into modern architectural genius and mind altering cheekiness was a wonderful end to our visit to Kyoto, I recommend it, from the above it seems to have given my brain a flip. This building offers the same kind of frisson as the beautiful modern house lurking among cherry and other trees in the middle of the Philosopher's Walk, hint hint, see my video of that.
We did not go to the museum...

But on the way to the station we had passed these steps. 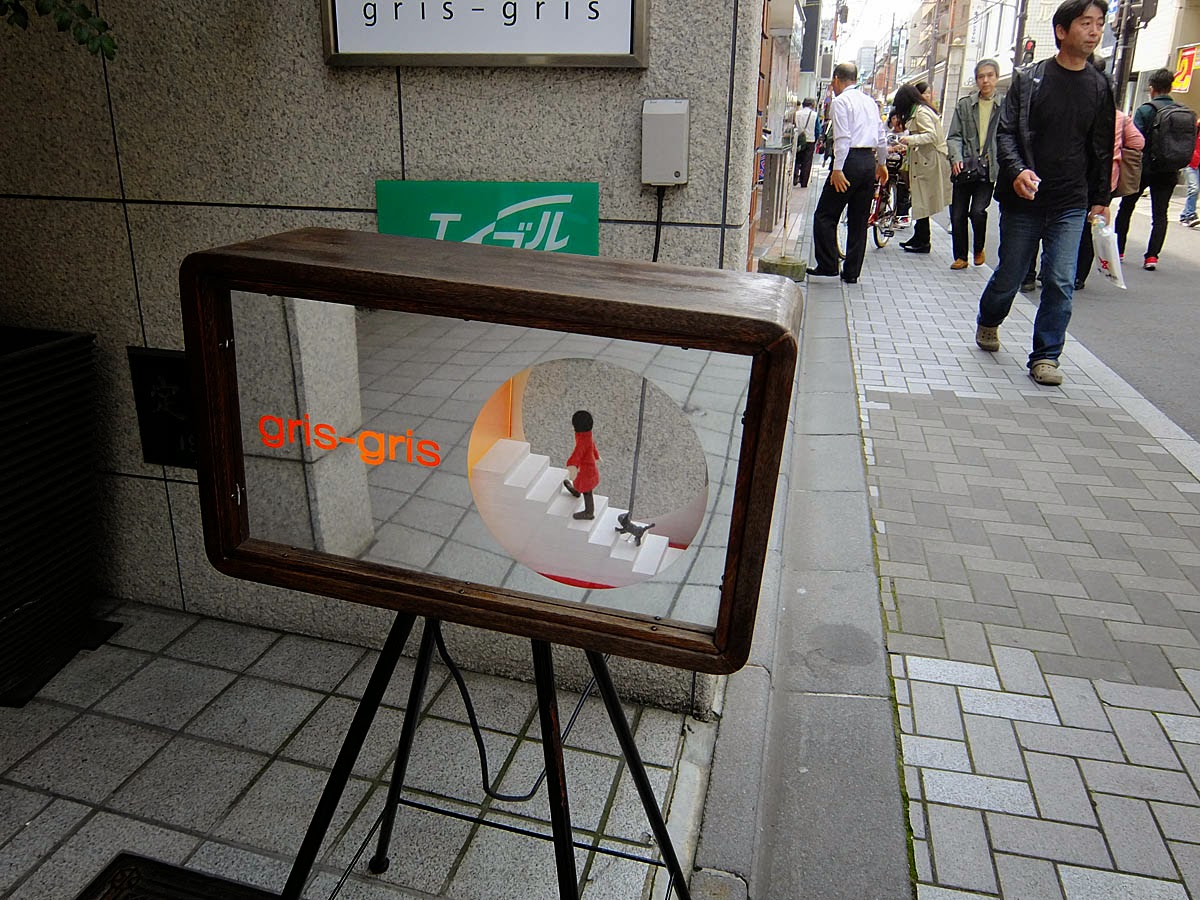