After the wild and crowded life thrust upon us exiting Harajuku Station and around Yoyogi Park, during which my Fuji XF-1 camera decided to lose control of exposure (hereinafter photos mainly from iPad mini, fortunately on hand), we set off down Omotesando, imagining it to have the serenity and charm it had when I walked there in 1980. It doesn't.

We slipped into the first subway entrance, Meiji-Jingumae, of the Chiyoda Line.

Helen caught this stunning image of modern Japan going out or going home... 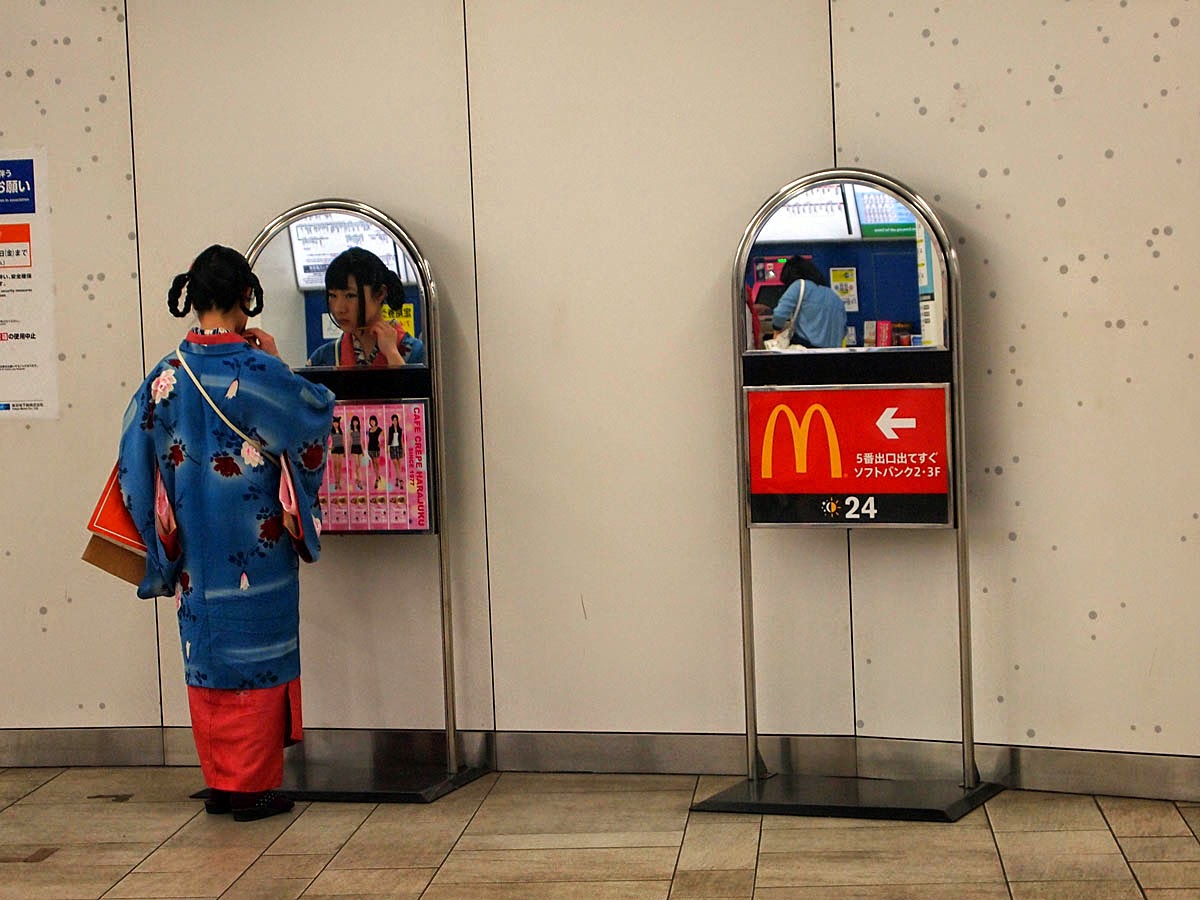 The sweet lolita subset of kawaii of Harajuku Sunday World above was wafting in... 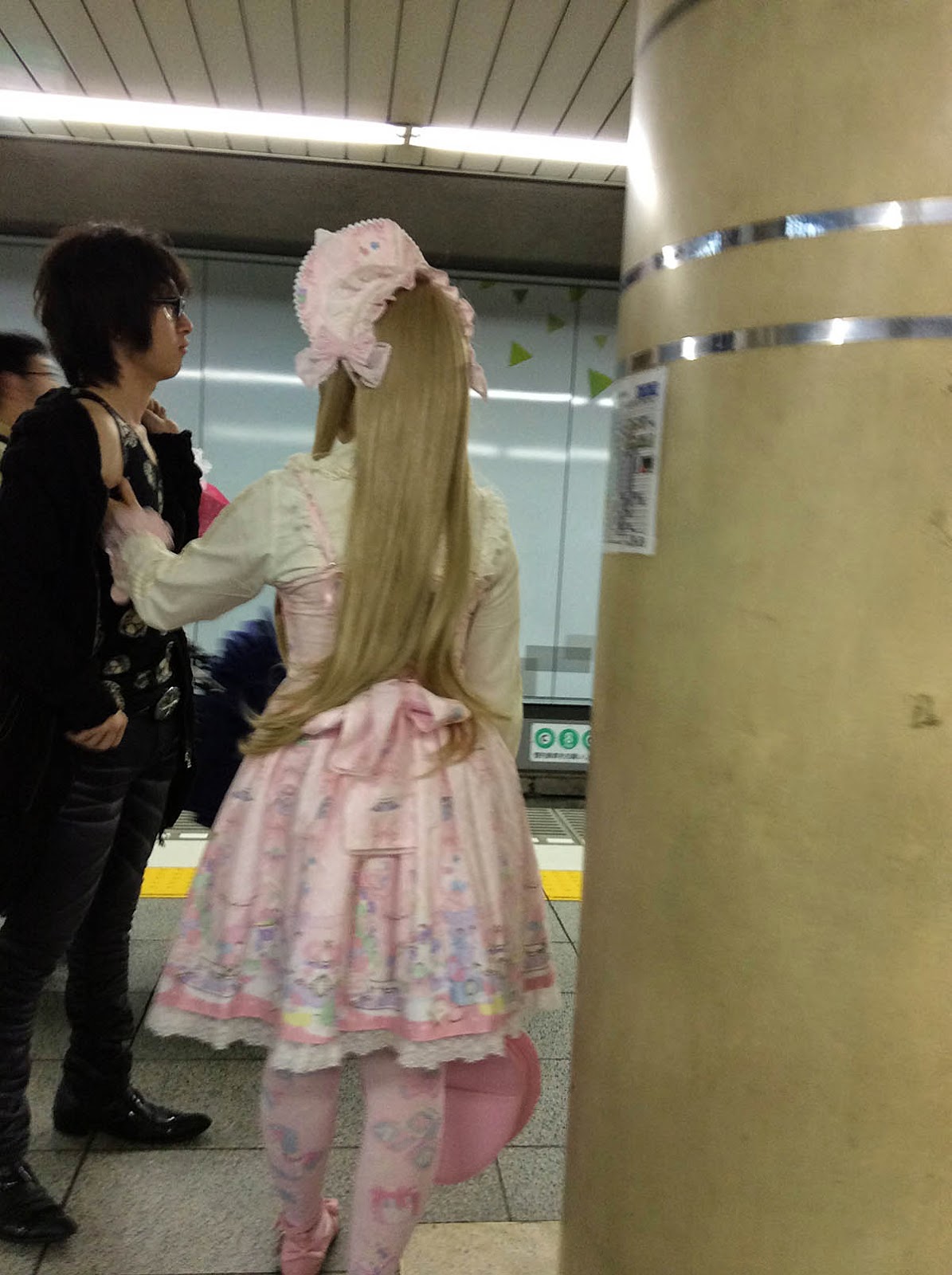 I could see from the subway map (it really does help to try to understand it in advance) that we could take this chanced-upon Chiyoda Line to a station near Nippori, from where swiftly on the Yamanote Line to Ueno, then the Ginza Line to Tawaramachi, then 300 metres walk home past our preferred sushi shop. This screenshot below is the middle bit of a standard map. To orient yourself, remember that the Yamanote Line of Japan Rail (this is a fantastic introduction to the villages/cities of the Yamanote Line) runs around the centre of the city, and while the carriages are pleasantly light green on the outside and lightv green in railway station signs, on the map it's the grey and white dotted line. So... in the moment I discover we are at the ticket gate of the Chiyoda Line at C03, Meiji-jingumae, south from Shinkuku, the world's biggest train station, we are down in the lower left of the map. Follow the green line with the C numbers and you are following the Chiyoda Line. I decided we should walk to Nippori JR station from Sendagi because that seemed likely to lead through Yanaka, an area with a 'traditional' shopping street of which I had read. Sendagi is C15. See Nippori north east from it, Ueno two stops away on the Yamanote, Tawaramachi G18 on the Ginza Line from Ueno, orange line. Top right. It was nice taking this ride on Sunday afternoon, Wikipedia reports that on the north side of Nishi-Nippori at peak hours passengers may be at 180% of capacity. 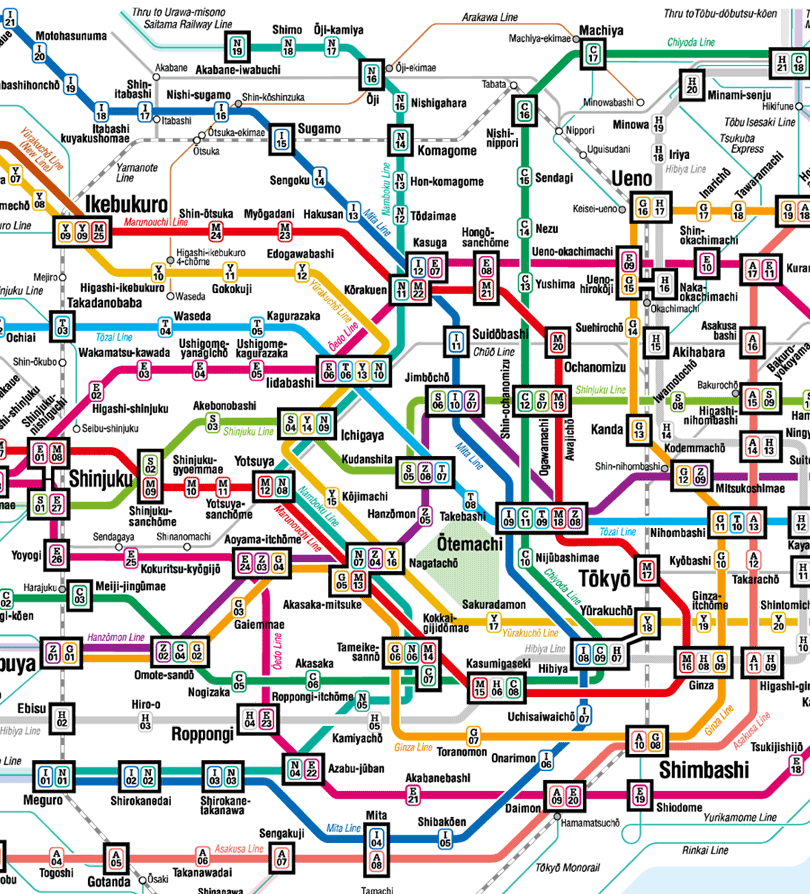 Soon enough we joined the Sunday afternoon crowd on Chiyoda Line, doing what respectable people do on the subway in the afternoon. 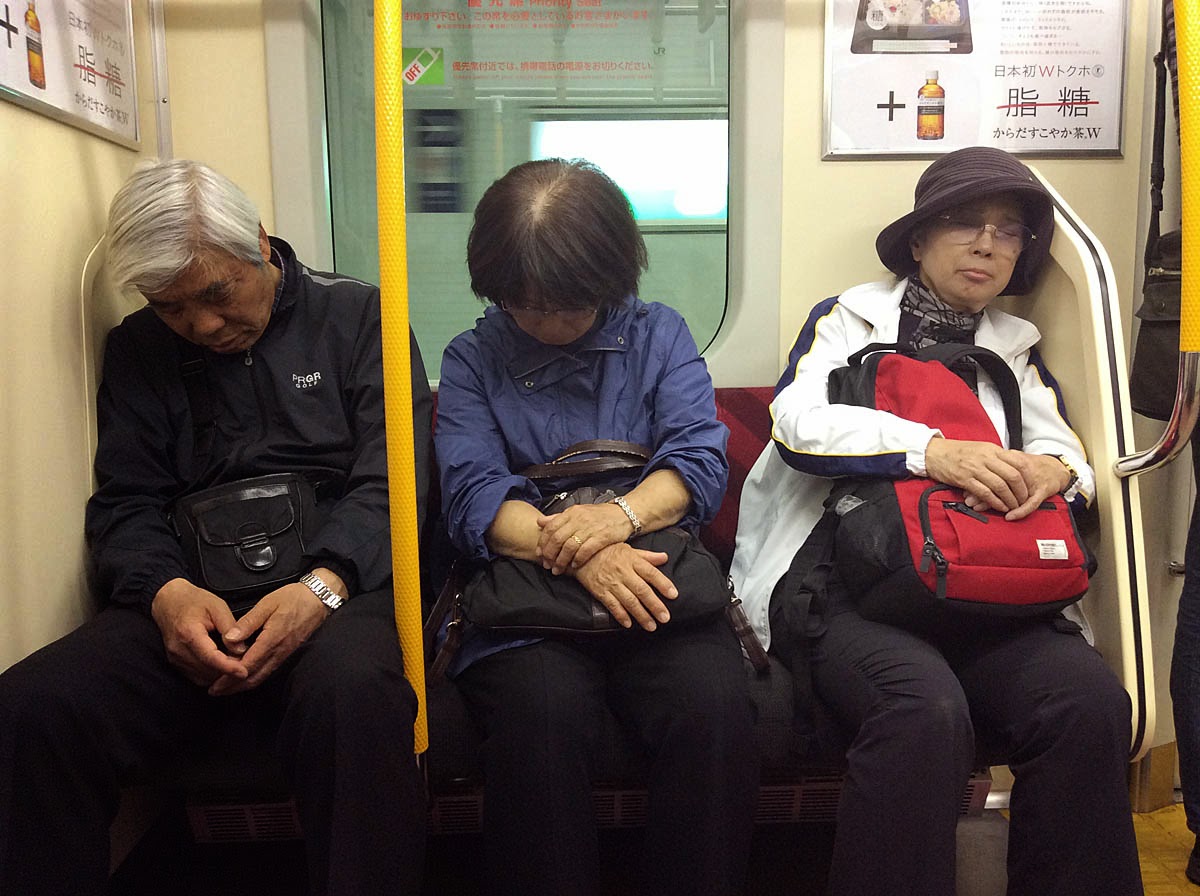 Helen woke me just before we arrived at Sendagi!

Arriving at the surface from a subway station on an overcast day can be tricky in any city, you take multiple flights of stairs or escalators, turning a number of times, you hit the street, blindfold comes off so to speak and where's north you say to yourself. It was where I thought. We were in a very suburban, residential environment. I confirmed from a passing cyclist that from the gate we should go left then right for Nippori. 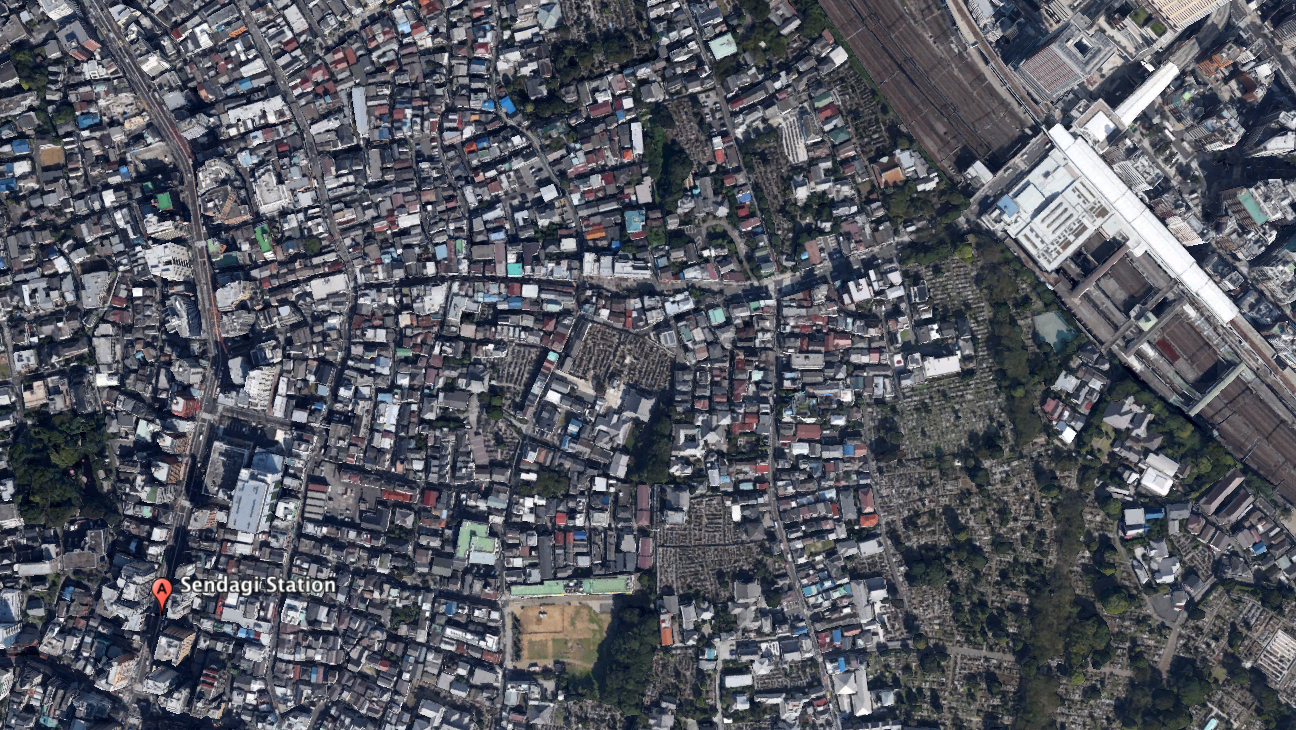 Proceeding left, we looked up a lane in the wrong direction and had to go there. This was a perfect quiet counter to the crowded parks and streets at better known destinations. Sudo Park, green spot left side of map above, bliss for young person with mother and soft serve below. 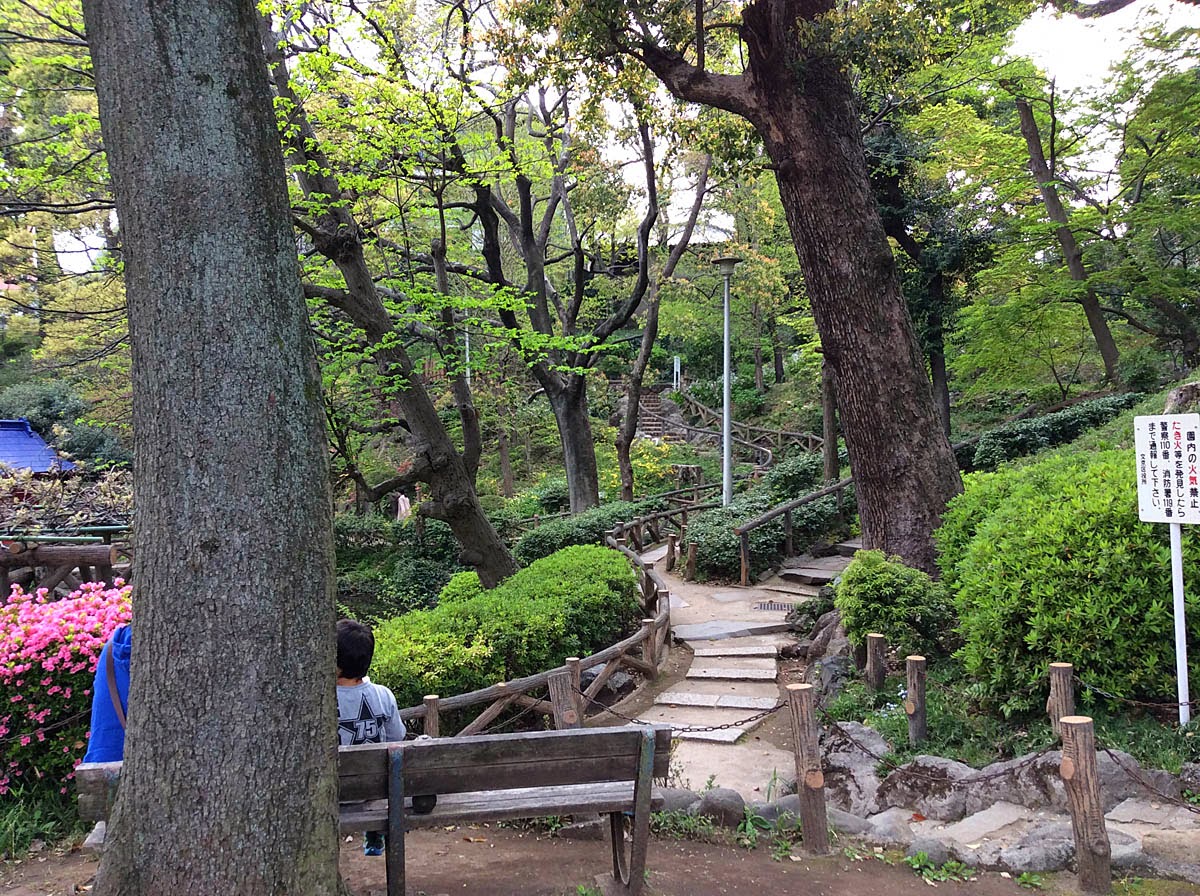 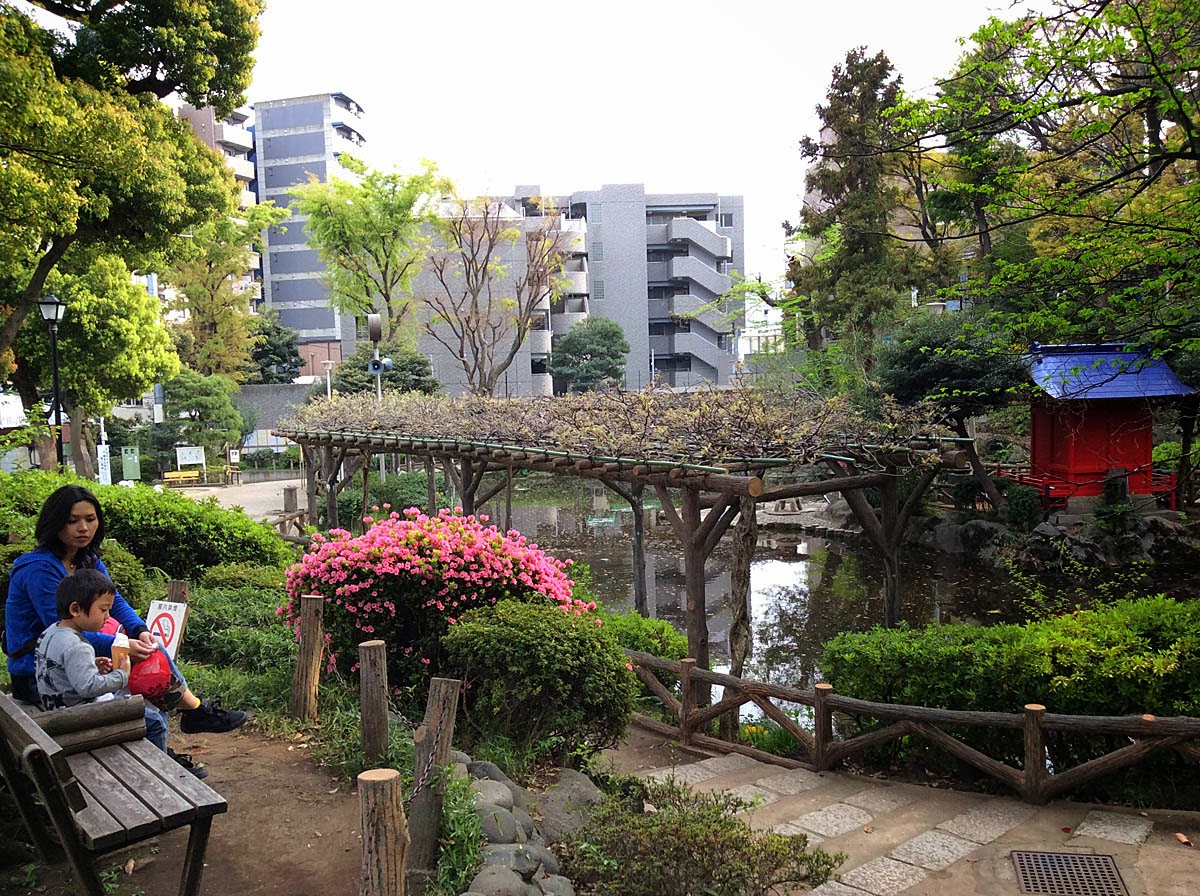 This photo also makes the point that after cherry blossoms come azaleas, after azaleas wisteria.

===
We proceeded through minor streets for what I understood to be Yanaka, a traditional merchant street leading to Ueno.

This is what we found. 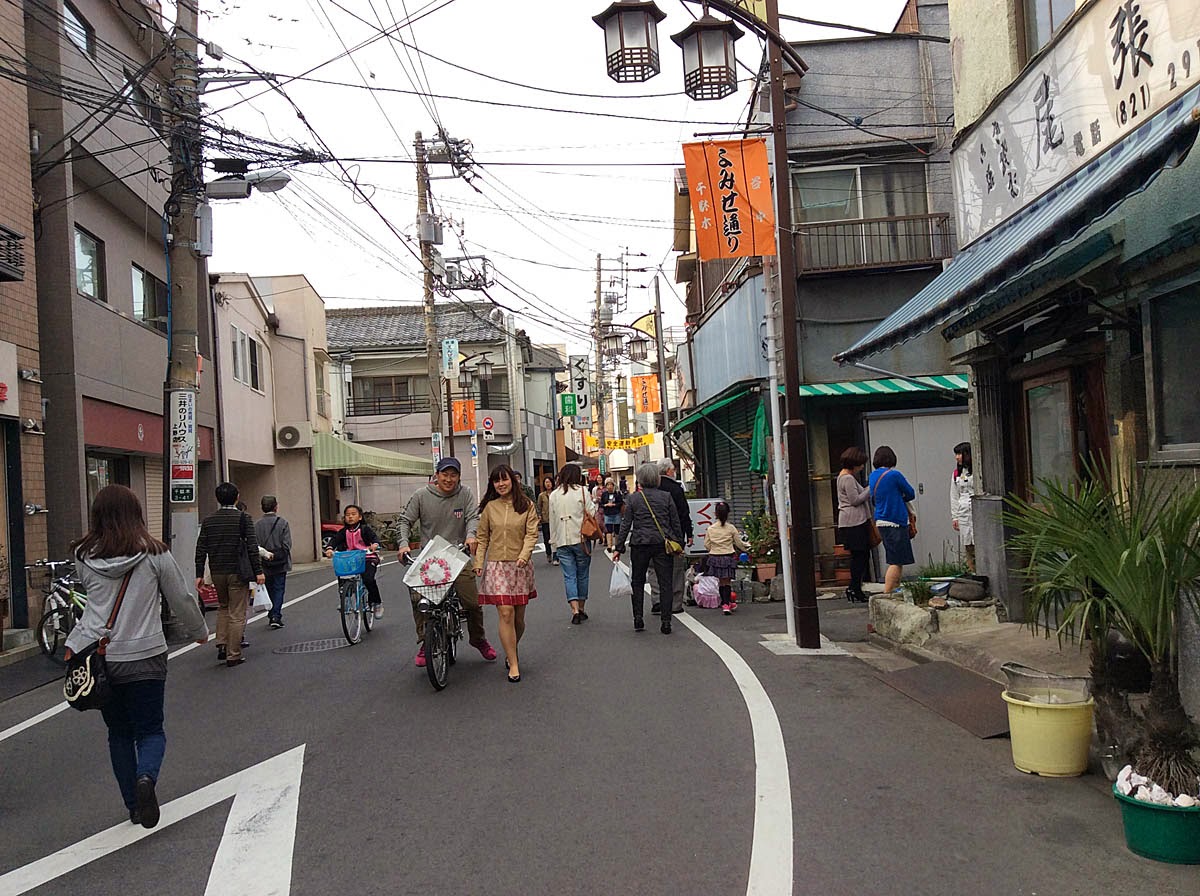 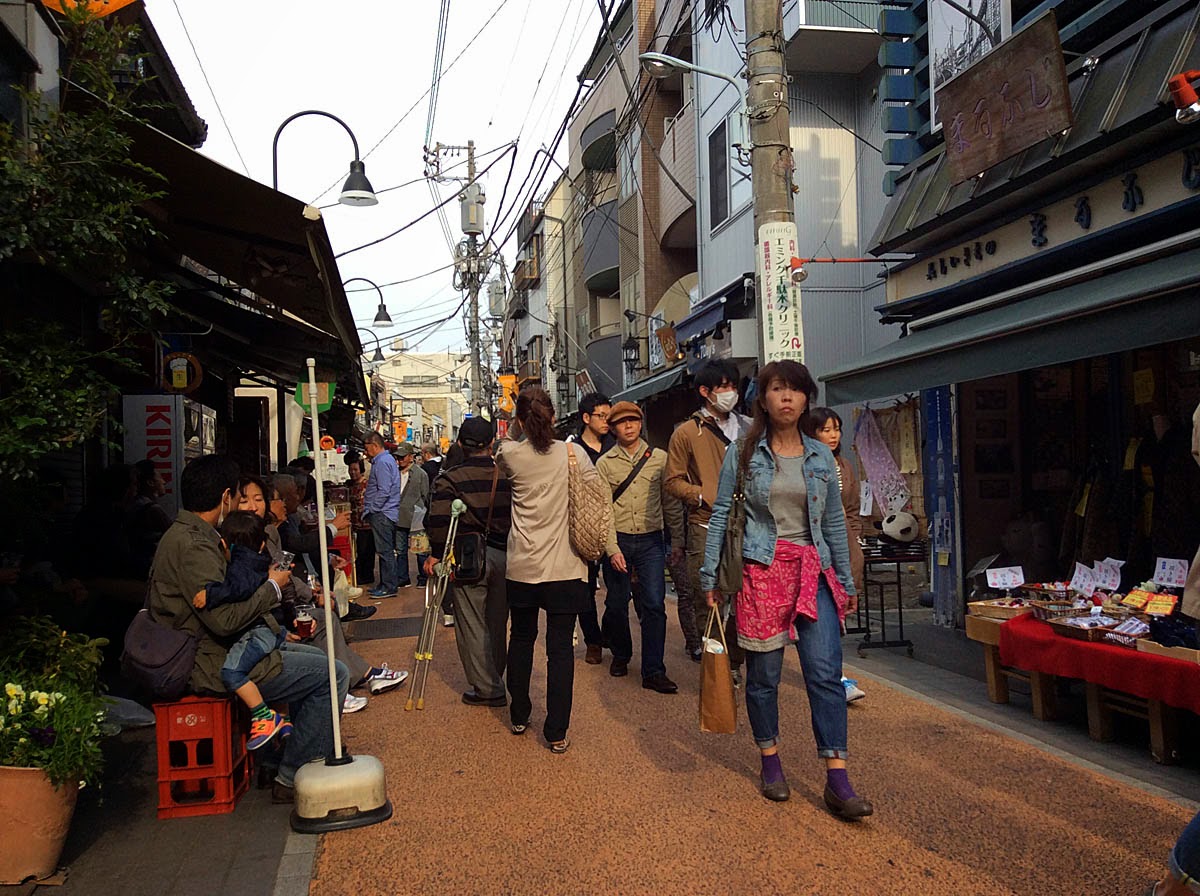 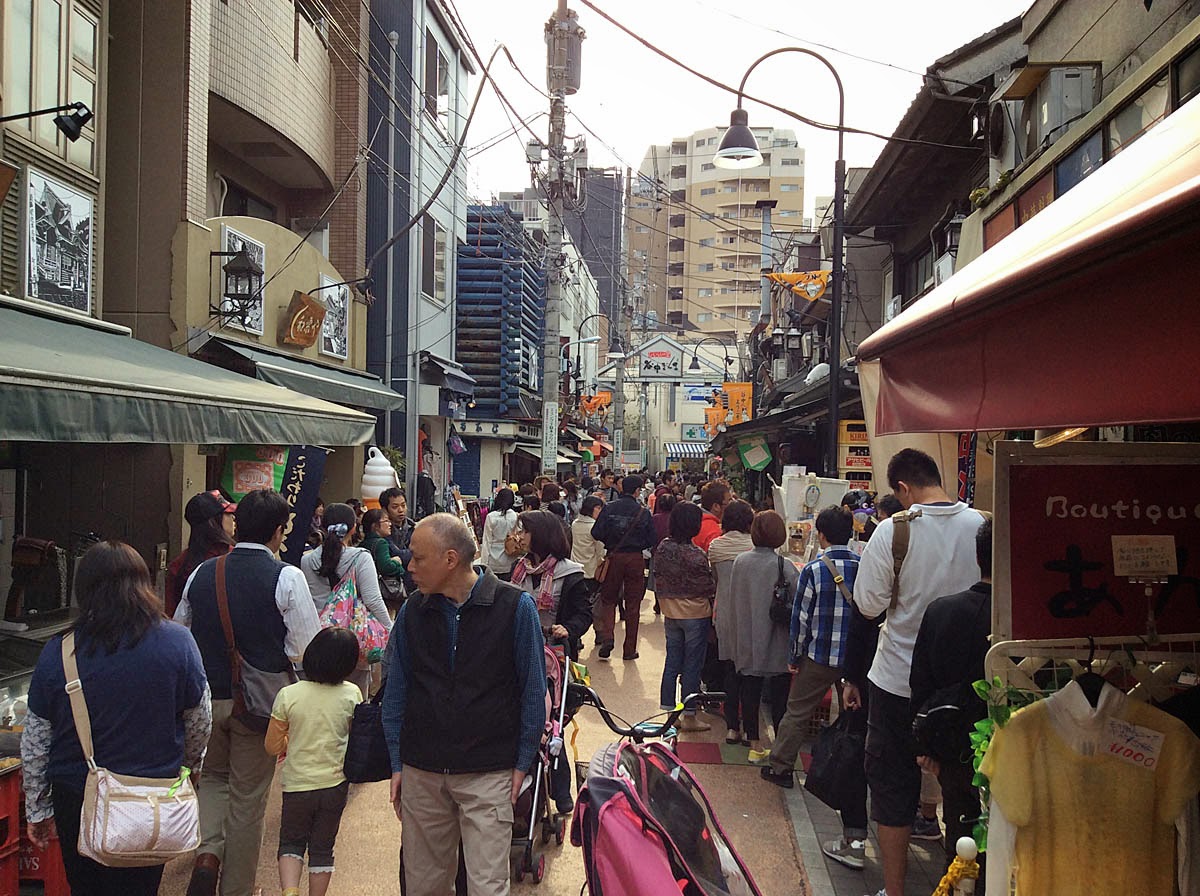 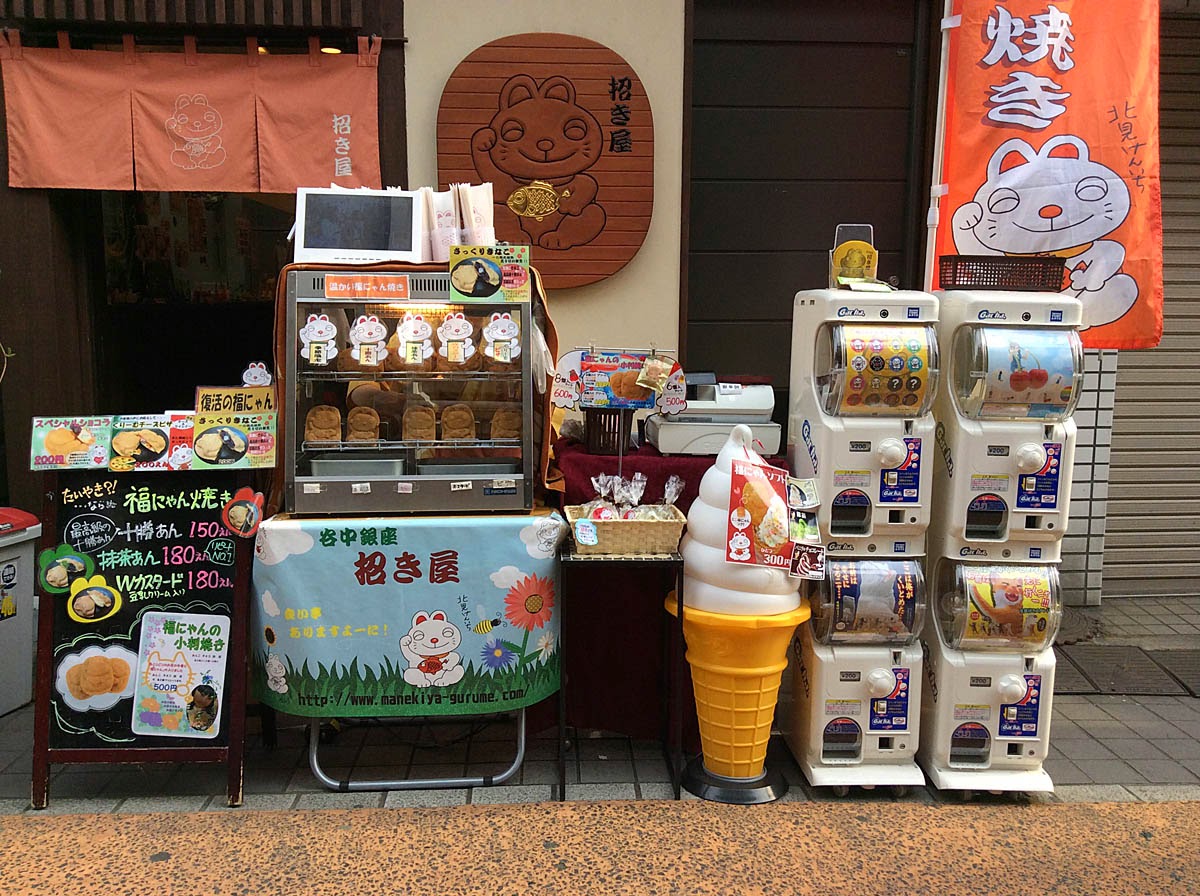 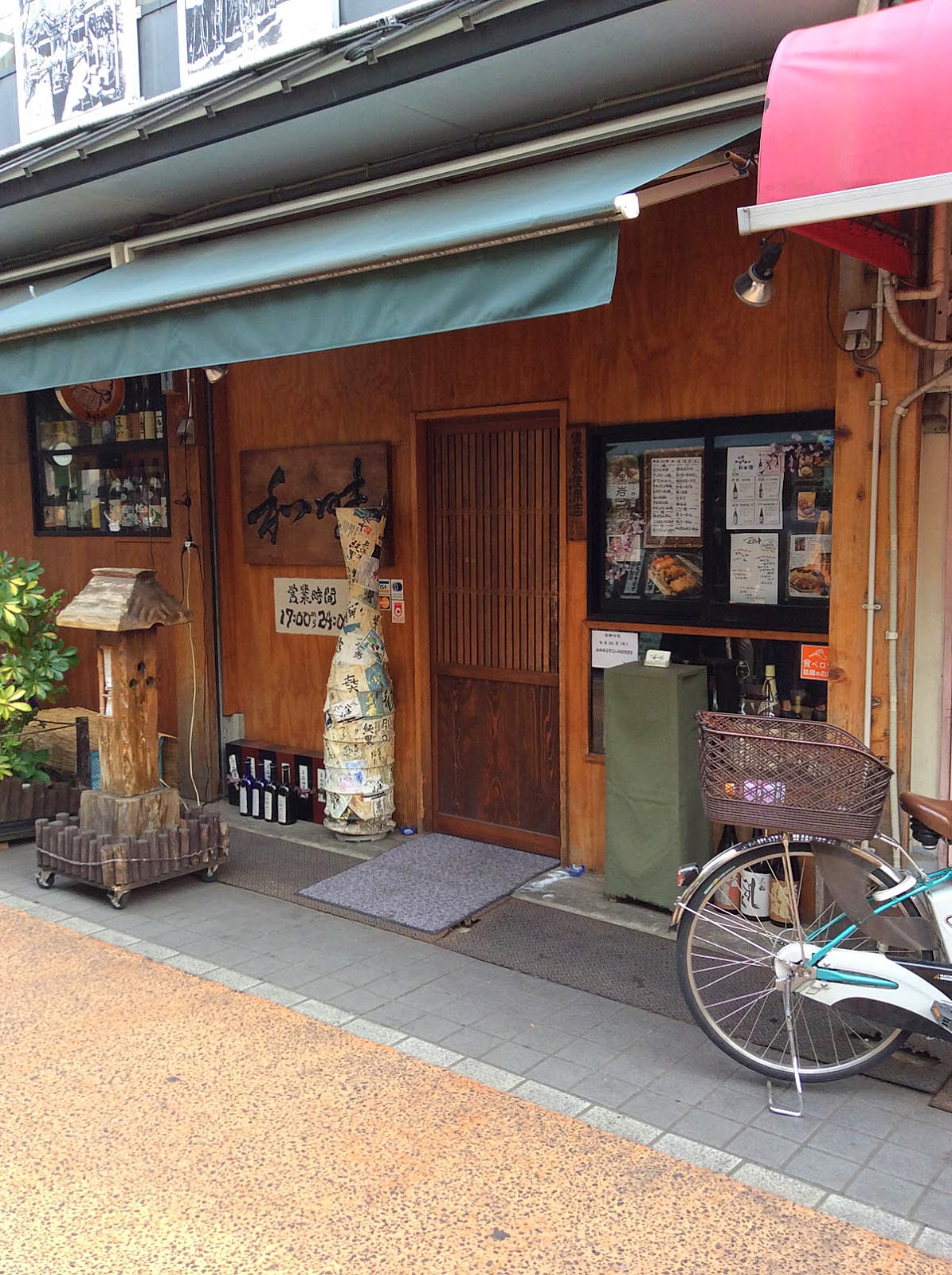 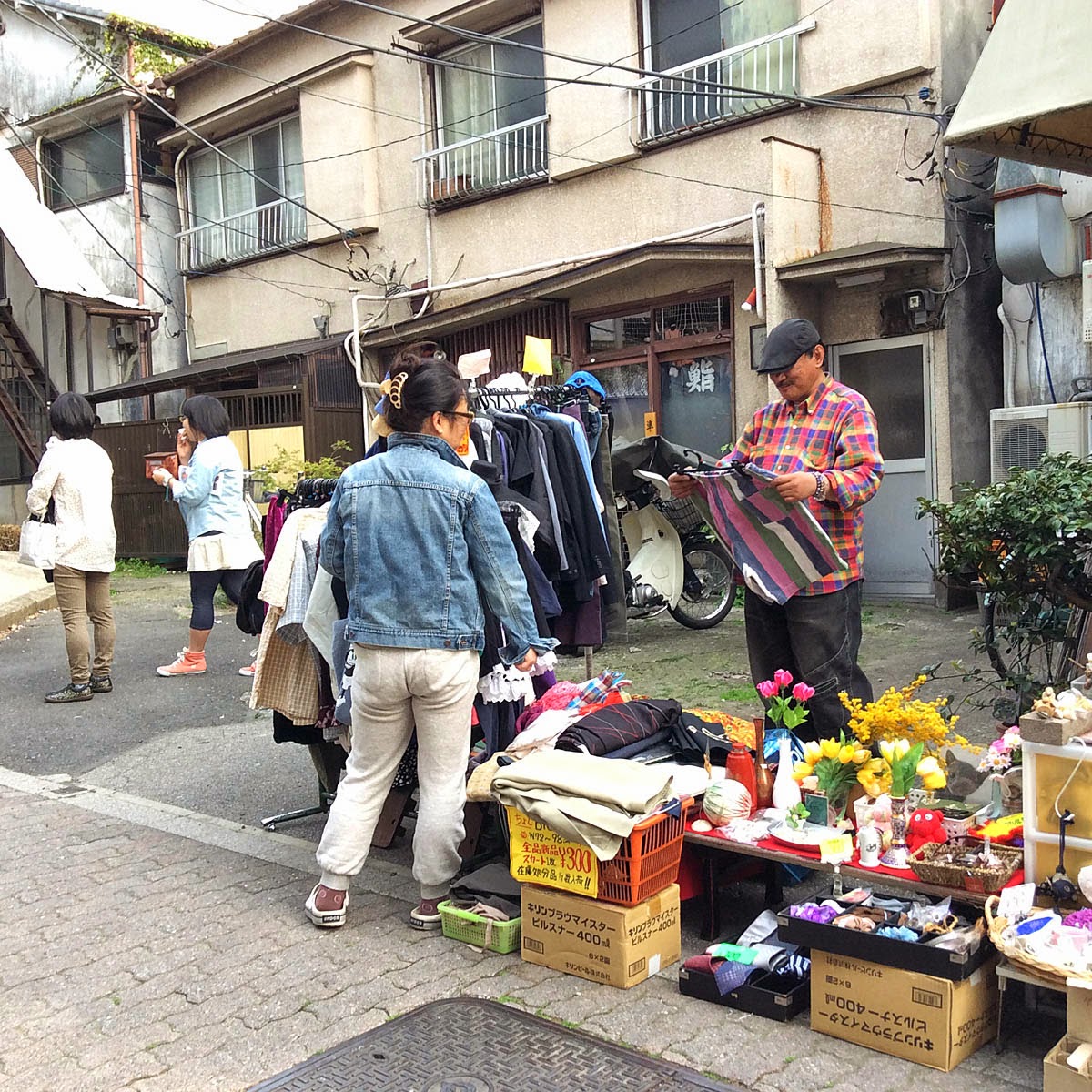 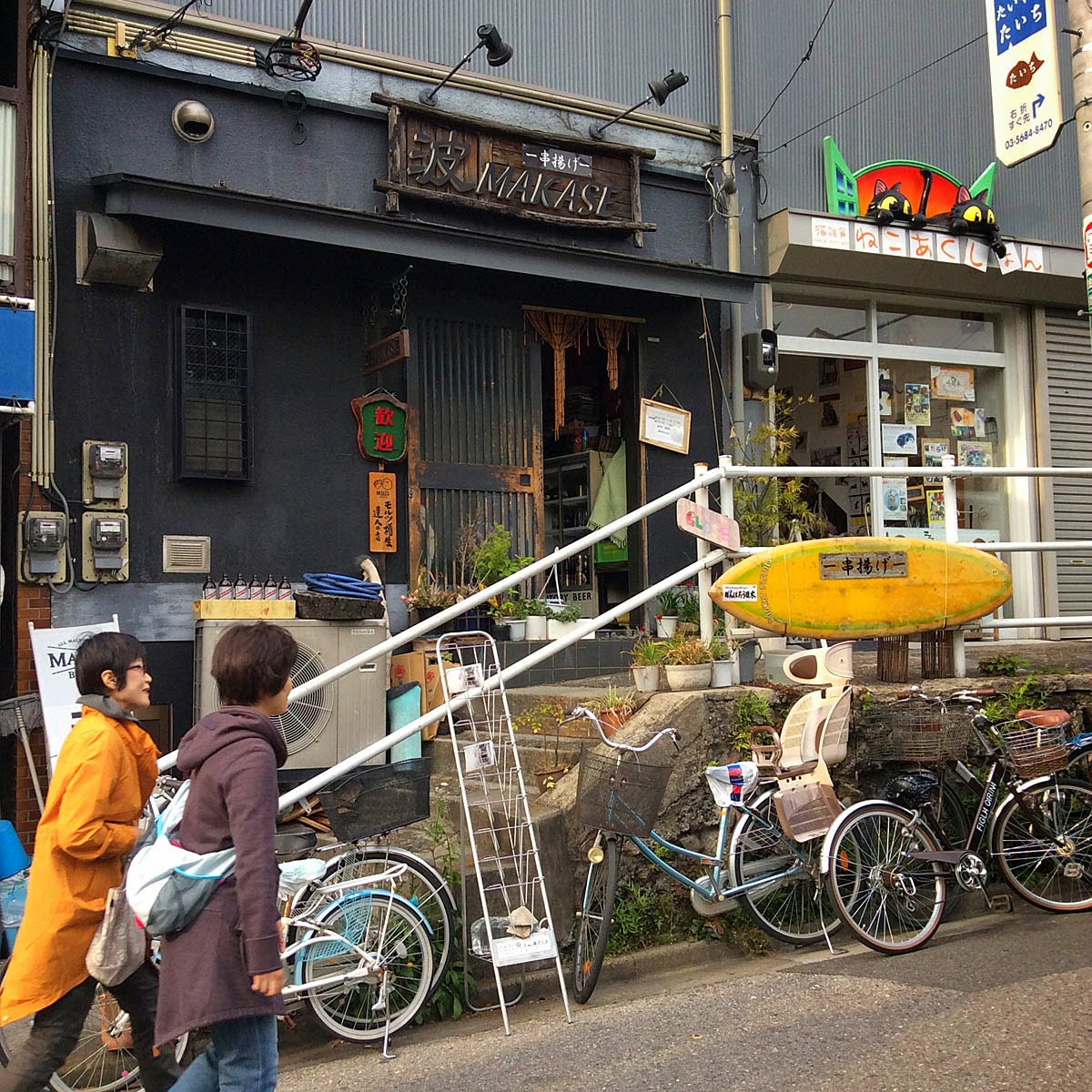 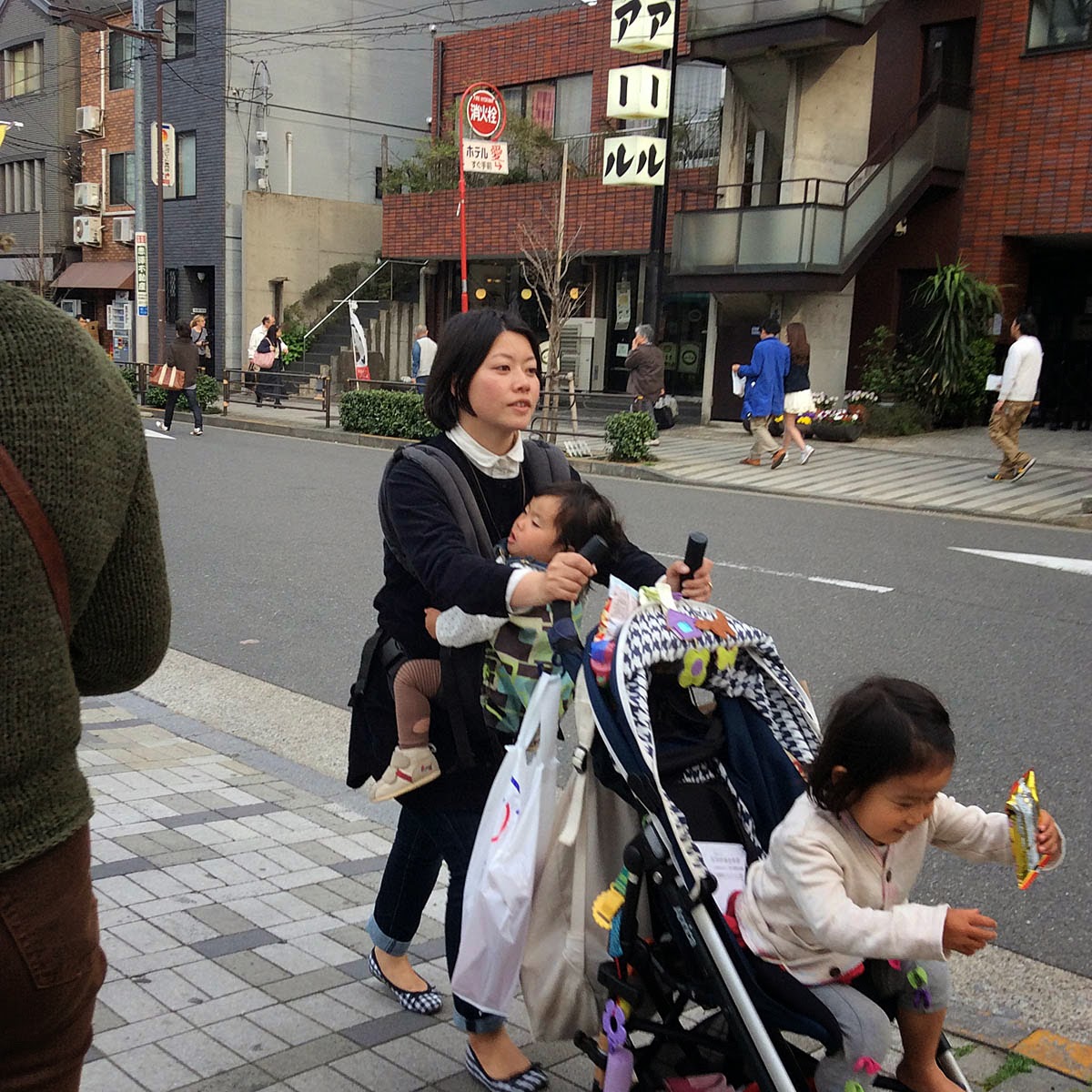 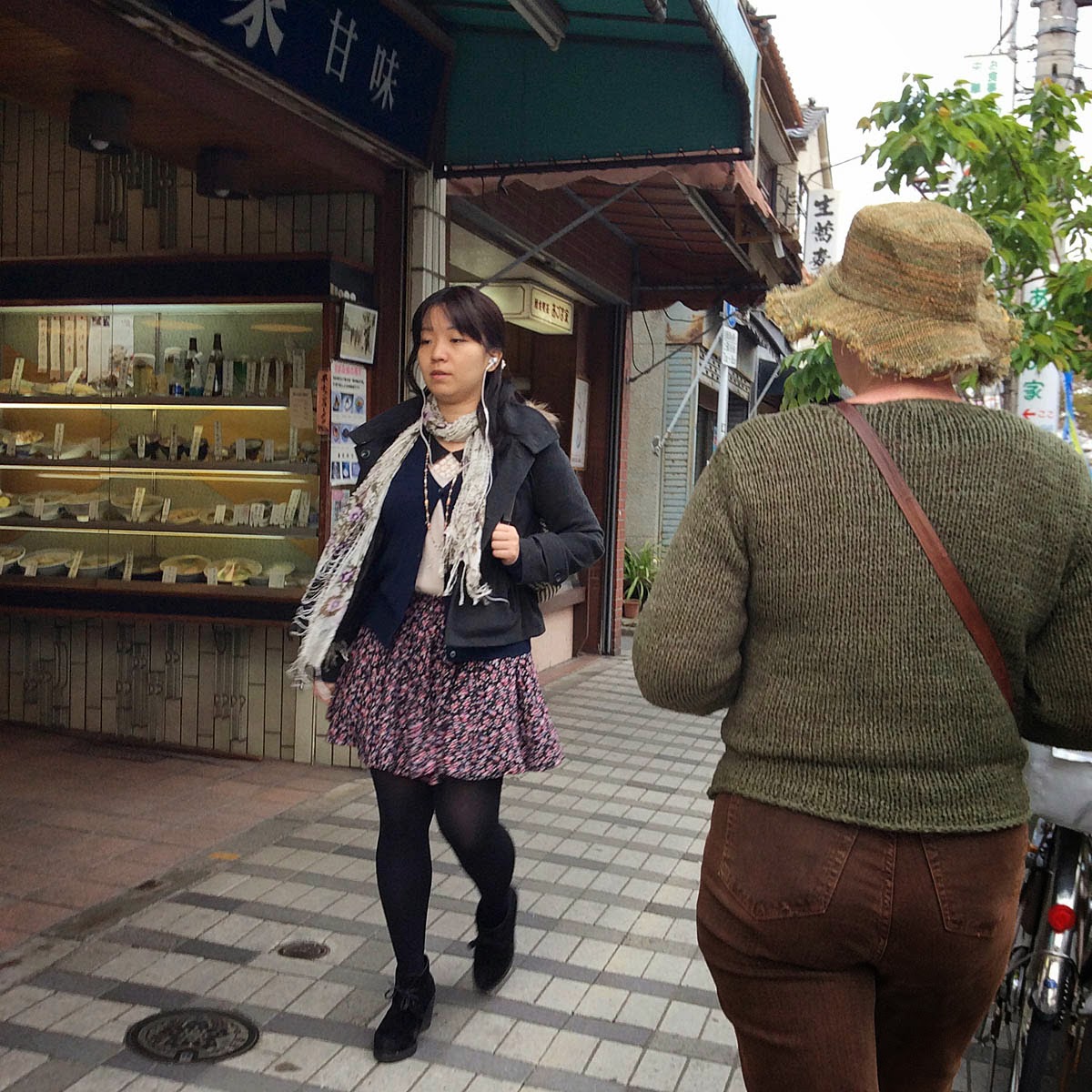 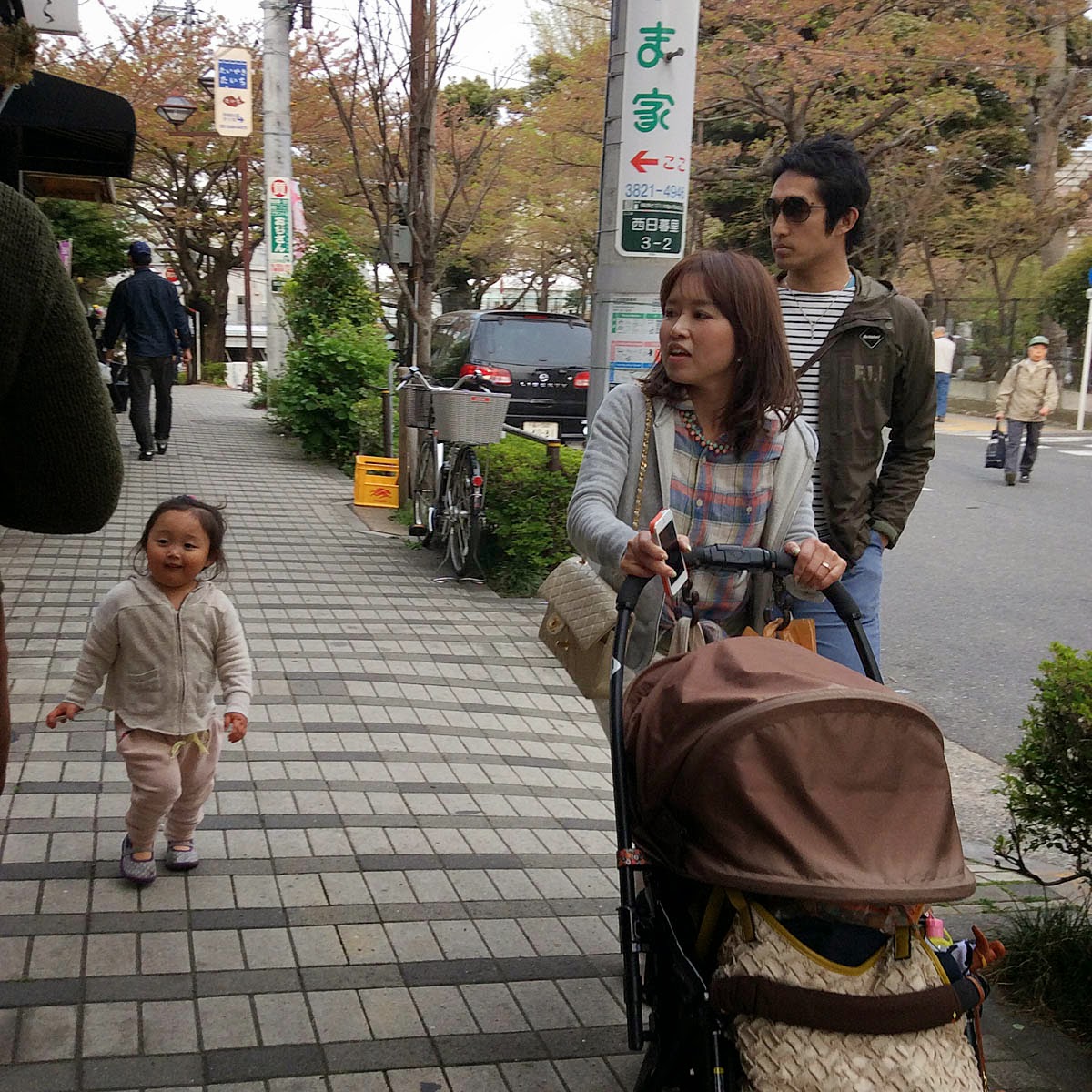 and then two stops to Ueno

then we hurried down below from JR Ueno to Ginza Line G16, where we queued properly for Car 5.
Footpaths and stations have lots of yellow pimpled pavers, much support for vision impaired.
There would be longitudinal grooves if one were to walk along a yellow line.
These yellow pavers calls halt. 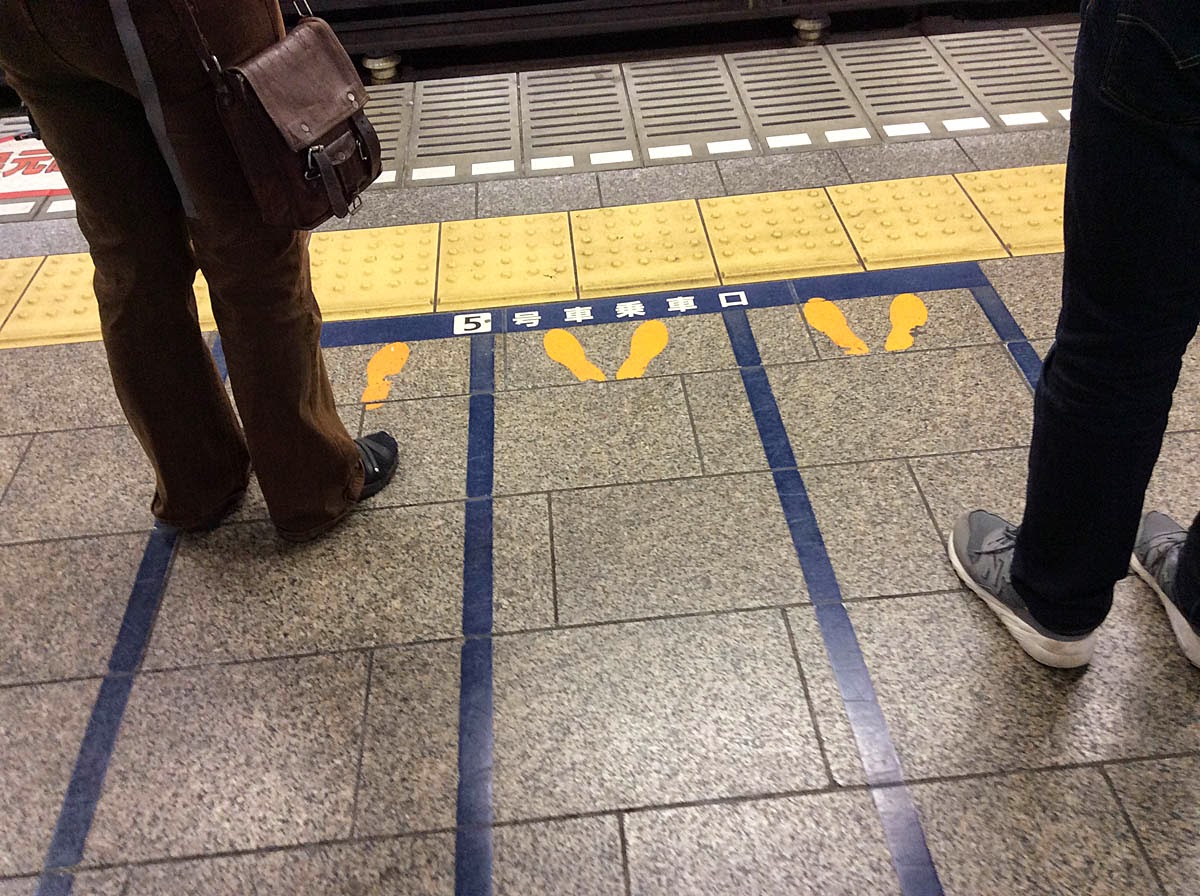